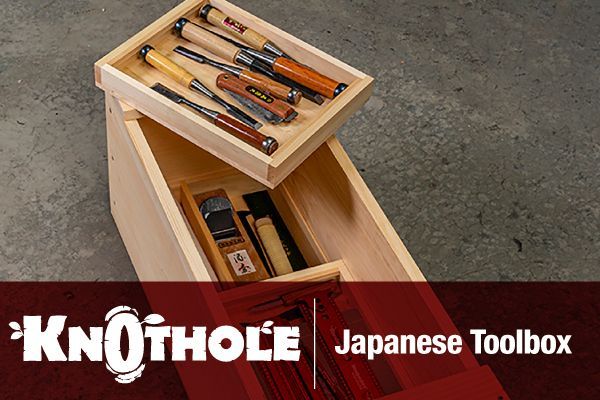 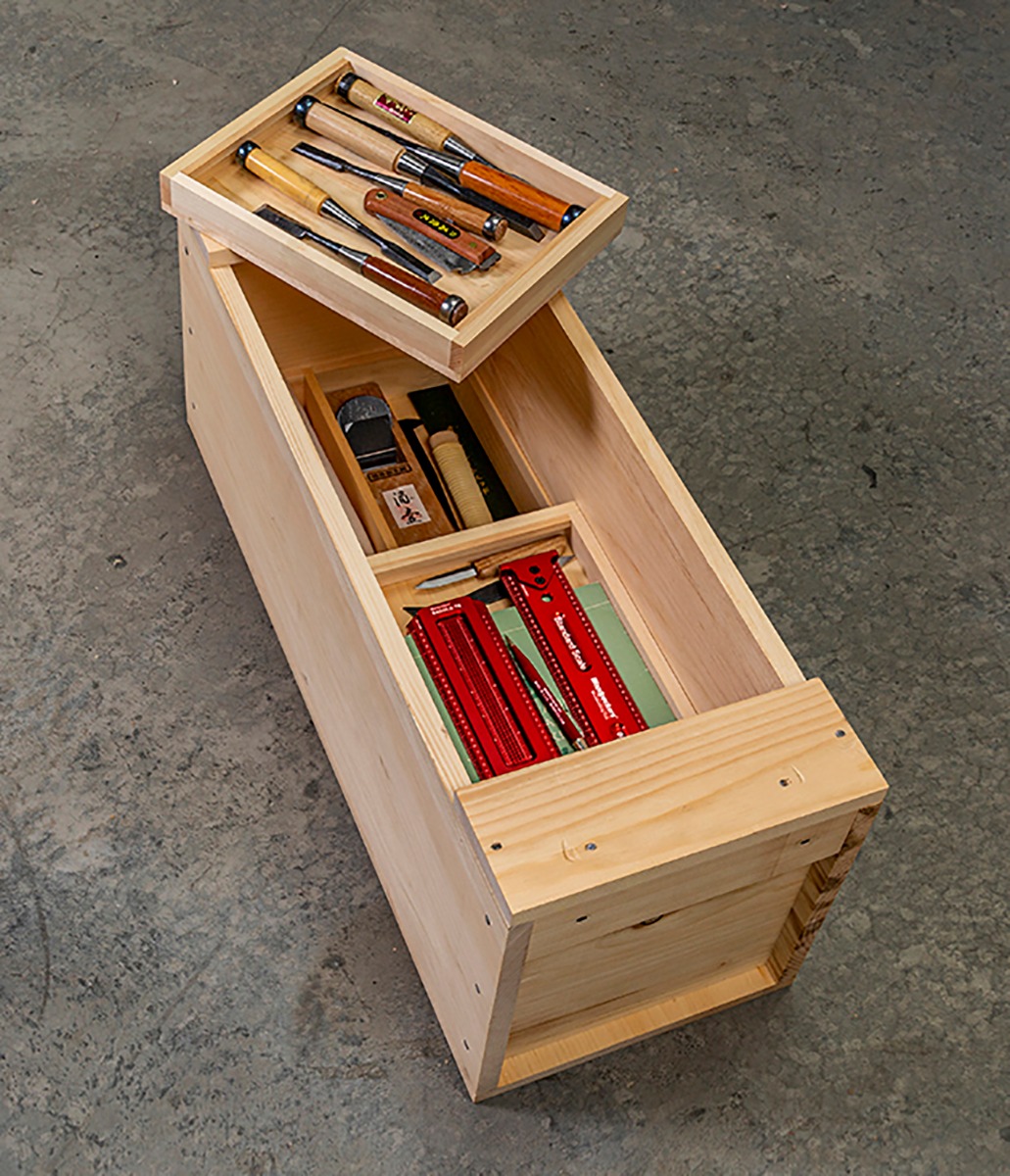 The centuries-old methods of Japanese joinery have captivated western woodworkers for the last few decades. Saws and planes that work backwards from ours seem foreign, until you try them out and see how they use gravity instead of fighting against it. Japanese carpenters all begin their careers with the same simple project – a box to store the tools of their new profession.

I’ve made several Japanese Toolboxes over the years. I’ve made them as gift boxes, toy boxes, seasonal storage, and some even hold Japanese tools!  All of them have the same basic design.  Why mess with centuries of success?

This project can be as elaborate or as simple as you want.  You can make it an exercise in using hand tools only, or use a mix of hand and power tools, as I did. Paulownia is the traditional material for Japanese Toolboxes because of its balance between light weight and good strength.  It’s hard to find in the States so I opted for Eastern White Pine. It’s similar in weight and works easily. I bought the stock from a reliable supplier who had nice clear boards wide enough I didn’t have to do any glue-up and they were planed to a nice uniform thickness. 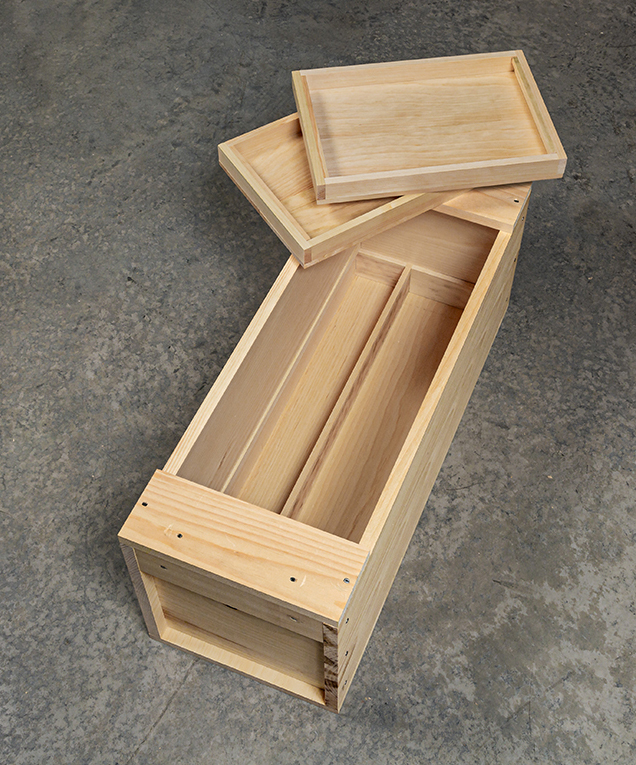 What makes a Japanese Toolbox a Japanese Toolbox is the clever way the top installs, not its size. They can be any size at all. Traditionally, you select the largest tool you plan to store in the box, and make the box long enough, then follow a similar logic to plan the width and depth. Having been through this several times, I’ve landed on basic dimensions of 31" long x 11-1/2" wide and 12-1/4" tall. I used 3/4" stock everywhere except the bottom. I planed it down to 1/2" to save some weight. 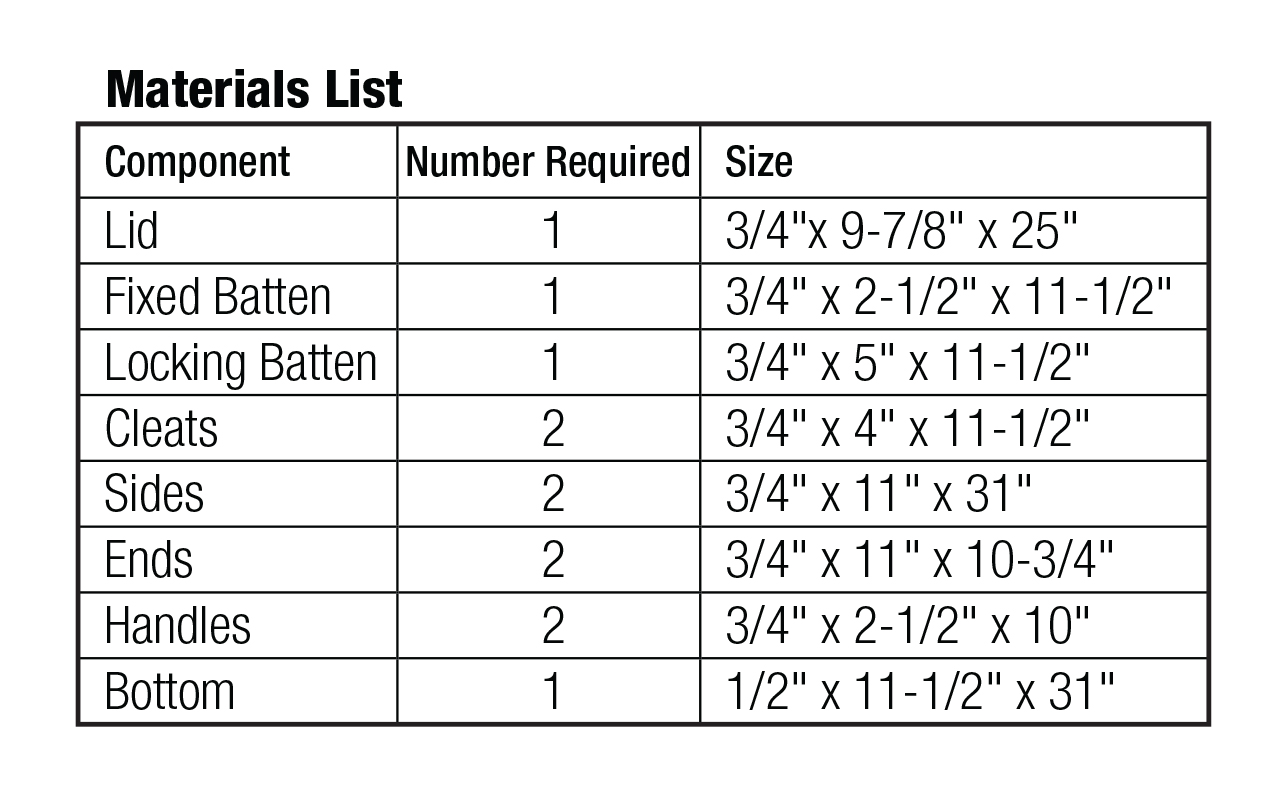 These boxes typically aren’t “high end joinery”. They consist mostly of simple butt joints fastened with nails, but after making several of these, I’ve found routing a dado in the sides to locate the ends adds strength and eases assembly.  I rout a 3/4" wide dado 3/4" in from the edge and 3/8” deep.  The setback moves the nails away from the edge of the board and creates room for the handles.  I marked out the first dado completely just to be sure I had everything spaced out right.

For both aesthetics and additional strength, I used cut nails for this project.  The wedge-shaped shank gives you better pull out resistance than similar-sized wire nails.  I drilled pilot holes everywhere I wanted a nail. The diameter of the pilot holes was roughly equal to the width of the nail at  the middle of its length. I drilled them about 3/4 the length of the nail.  When placing a nail in a pilot hole I was careful to orient the wide side of the nail with the grain to avoid splitting.  This is imperative if you are using hard, dense wood.

Mark nail positions in from each edge and centered on width.

Locate position of nails from the edge using a stopped rule such as the Paolini Pocket Rule.

Since there’s no attempt to hide the nails, they look much better if they’re spaced out uniformly. I used the standard scale on a Woodpeckers Woodworking Rule to mark the position of a nail in from each edge, then used the Centering Scale to mark another position half-way between those two. In the case of the bottom, I marked two more positions half way between the center and the end nails. Then I went back over all those and crossed the lines to place the nails in the centers of all the boards…3/8" everywhere except the offset ends, which were 1-1/8" in from the sides and bottom. 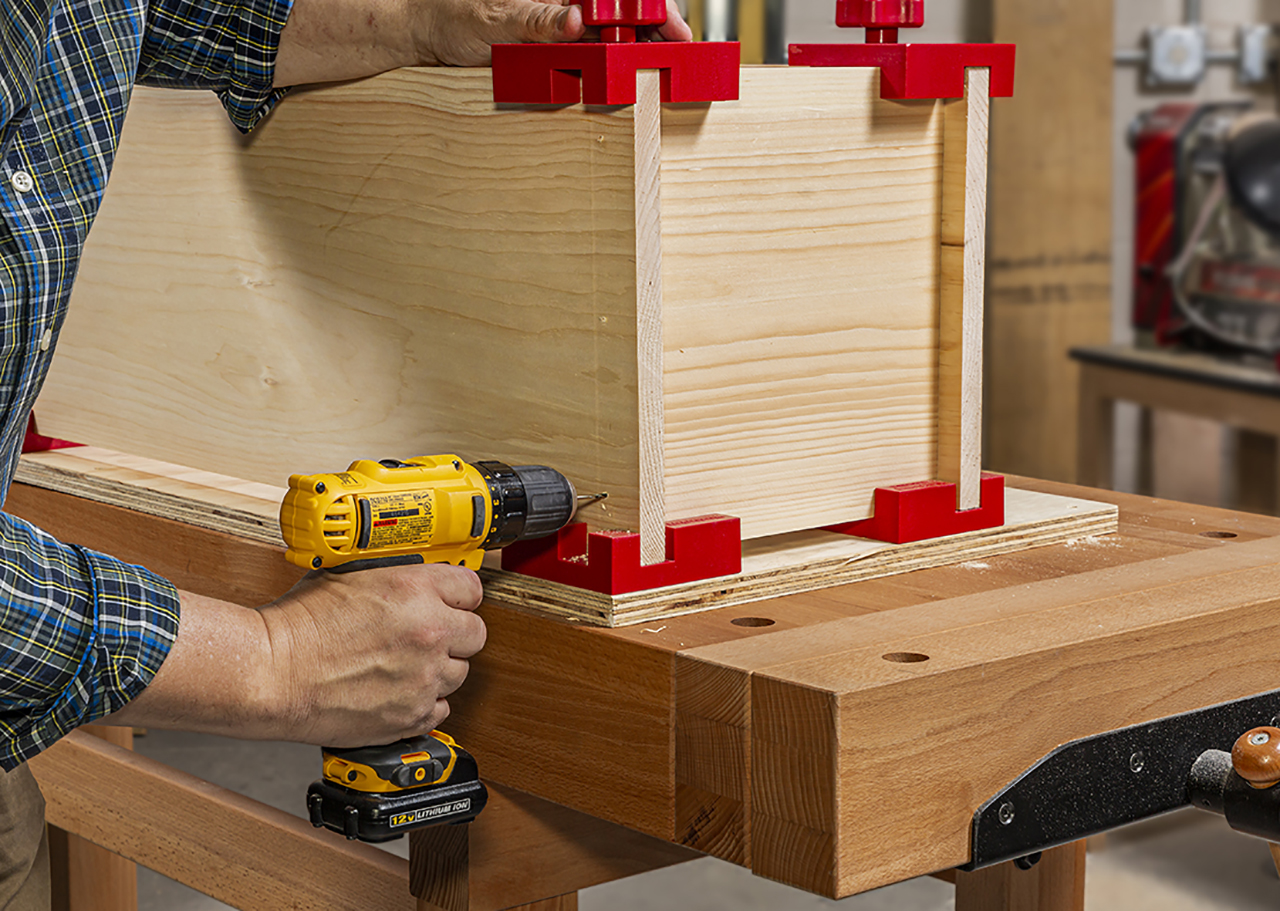 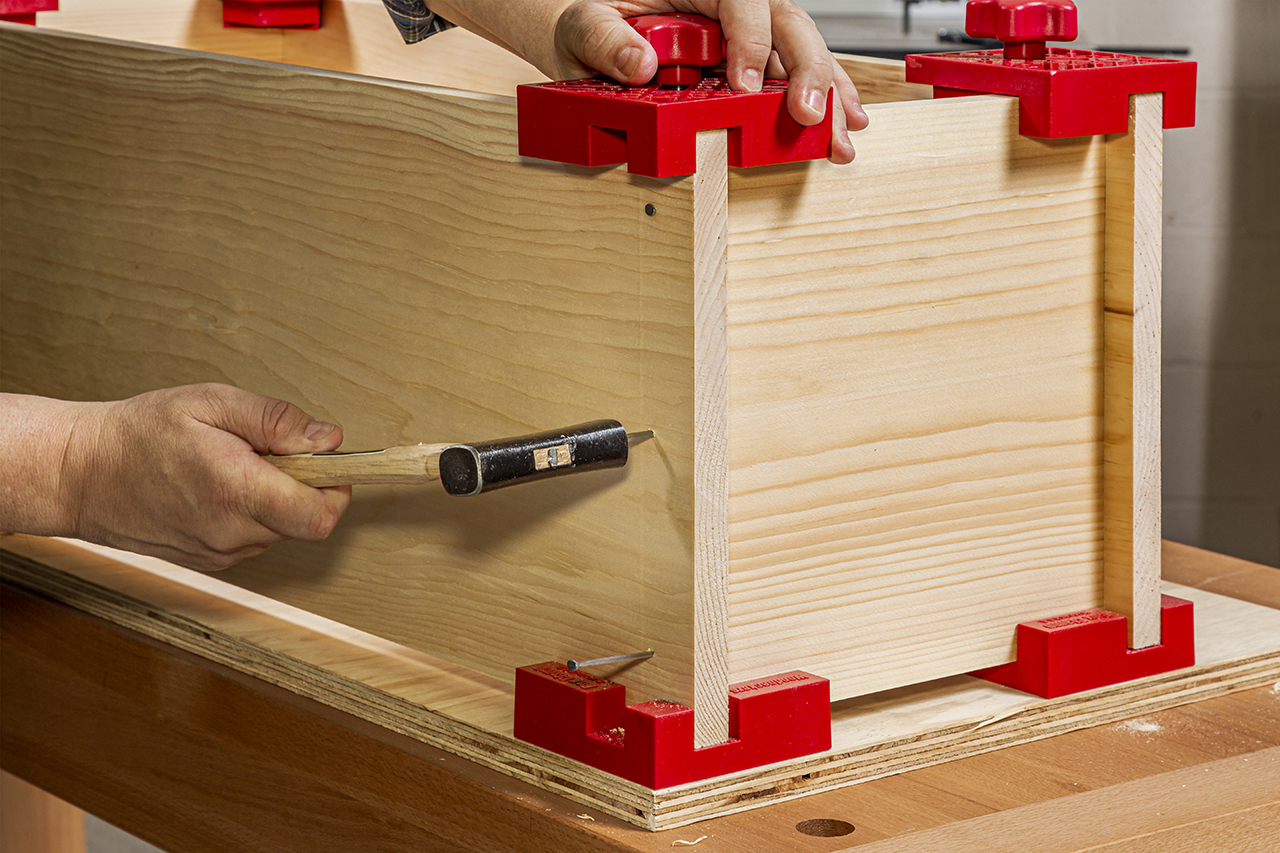 Woodpeckers Box Clamps held the box square while I drilled pilot holes and drove the nails.

I used Woodpeckers Box Clamps to hold the sides and ends square while I drilled pilot holes and nailed the box together. As you can see in the photos, I was able to drill pilot holes and drive the nails without ever releasing the box clamps. I was making several boxes, all the same size, so I took advantage of the ability to mount the clamps to a board for easy repeat clamping. 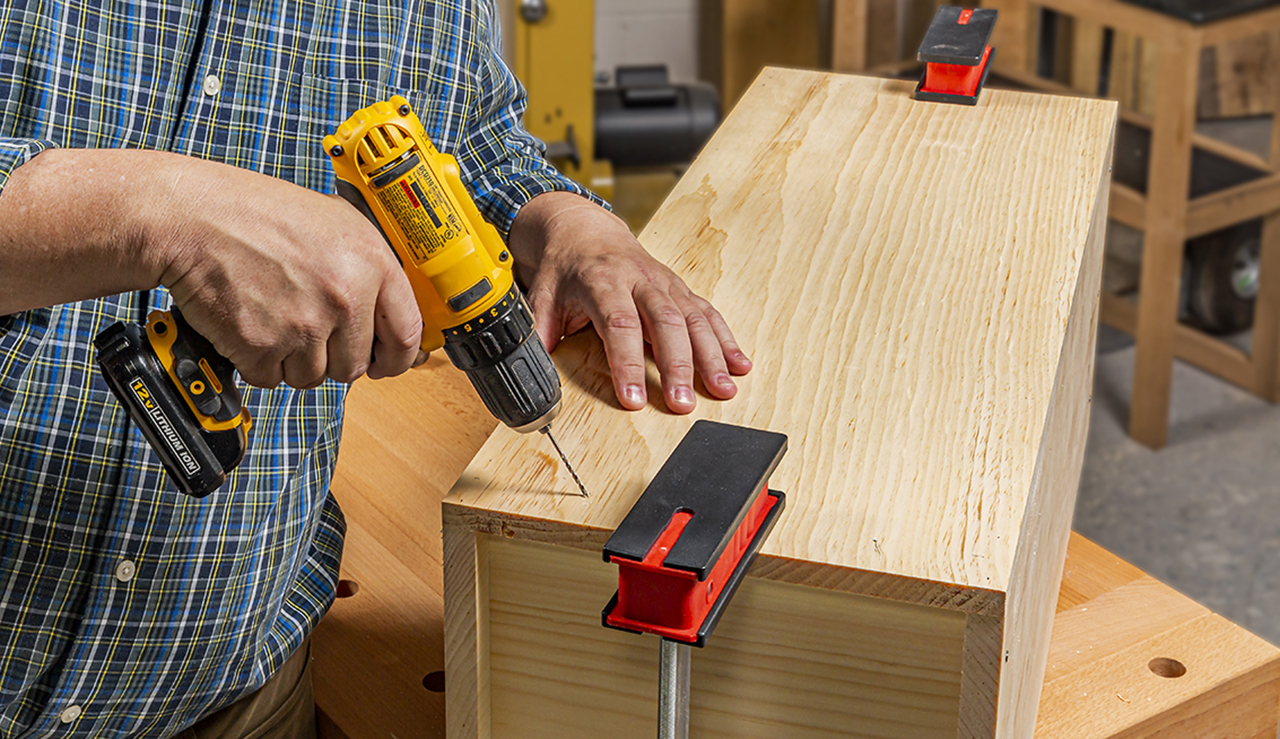 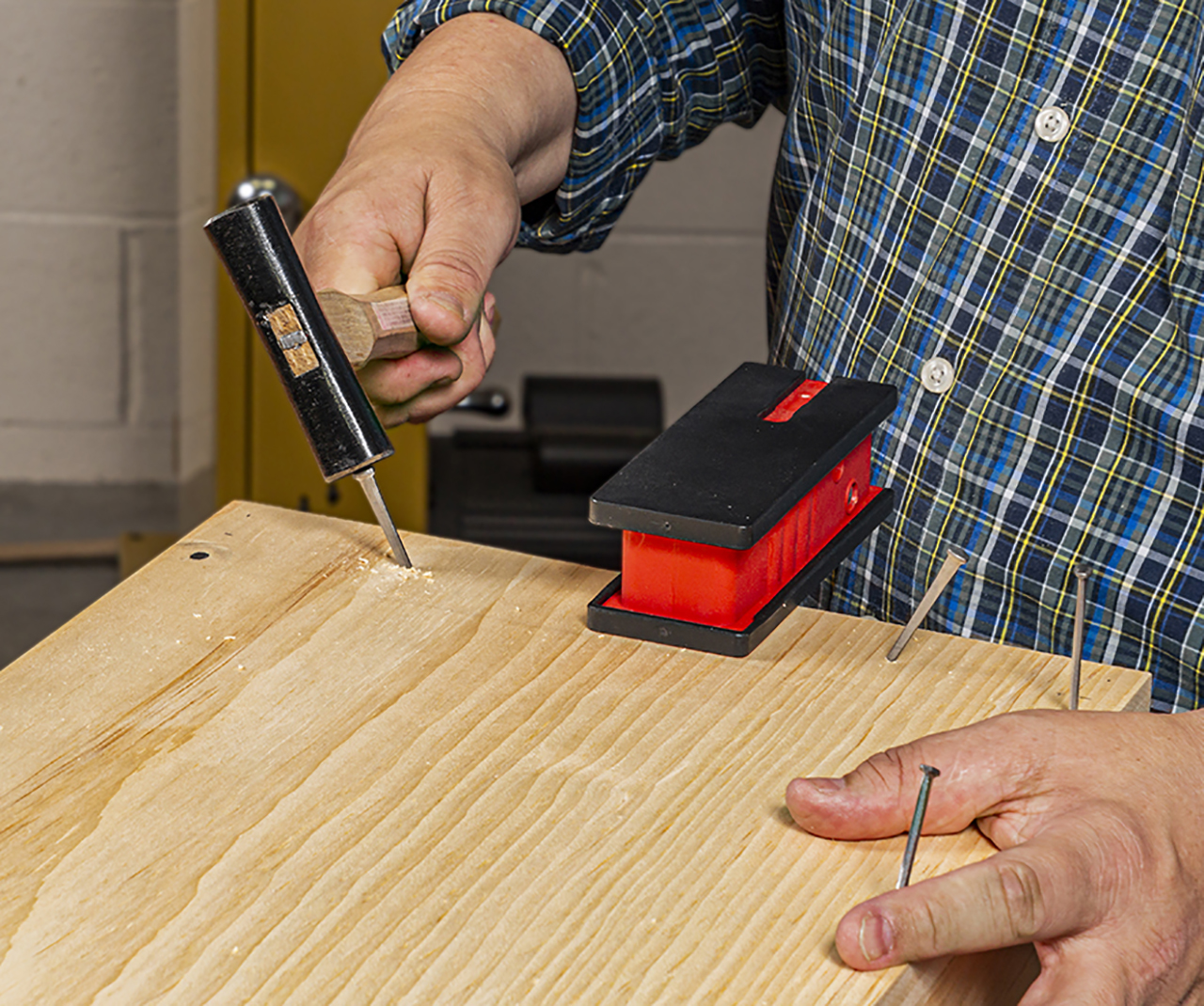 I angled the nails in the bottom of the box. This gives them a better hold against the load inside.

Once the sides and ends were nailed up, it was time to attach the bottom. To improve the holding power of the nails, I put them in at an angle. In the photo you’ll see I put pairs in at opposing angles. The nails holding the bottom should be set below the surface to prevent marring any bench, table or floor the tool box is resting on. 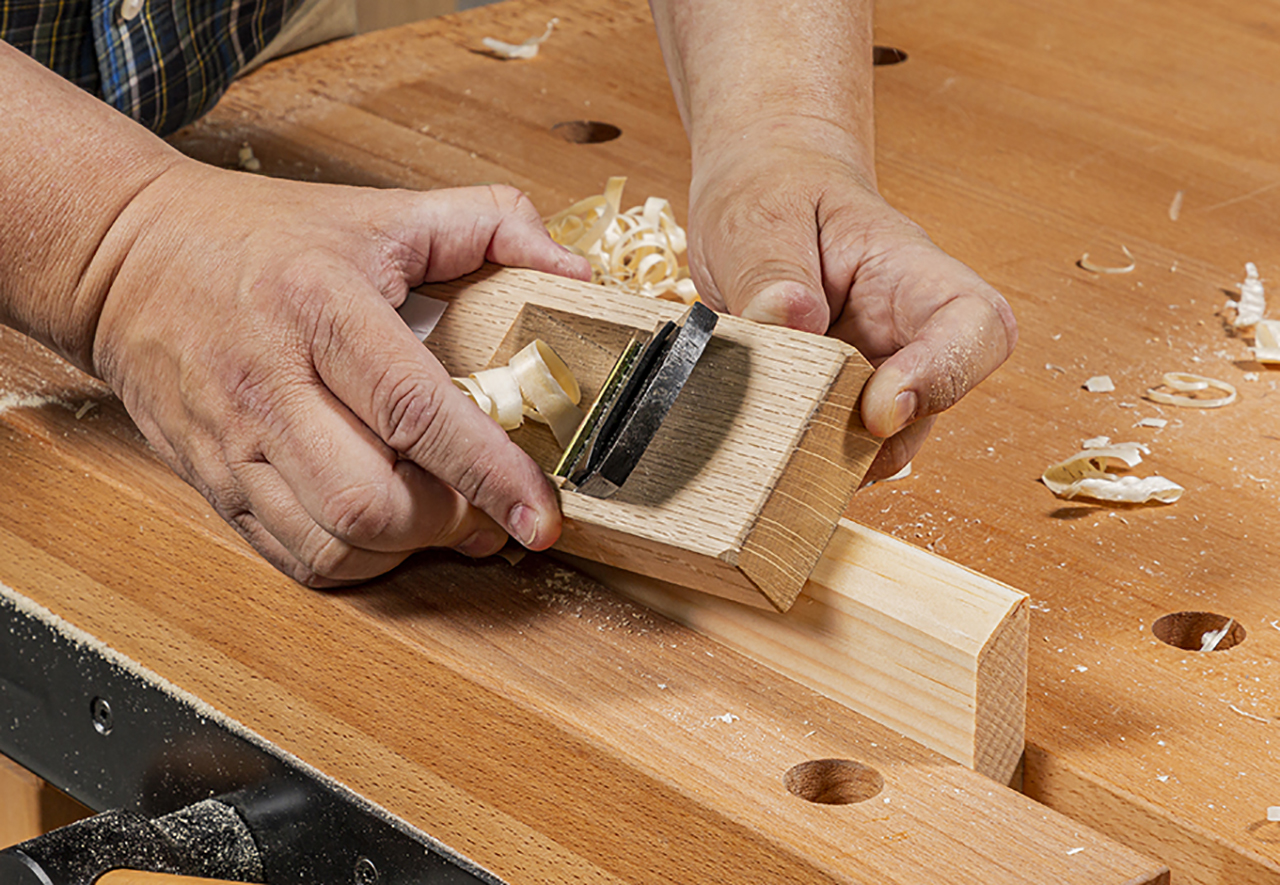 I beveled the inside lower edge of the handles with a small plane to create a grip. 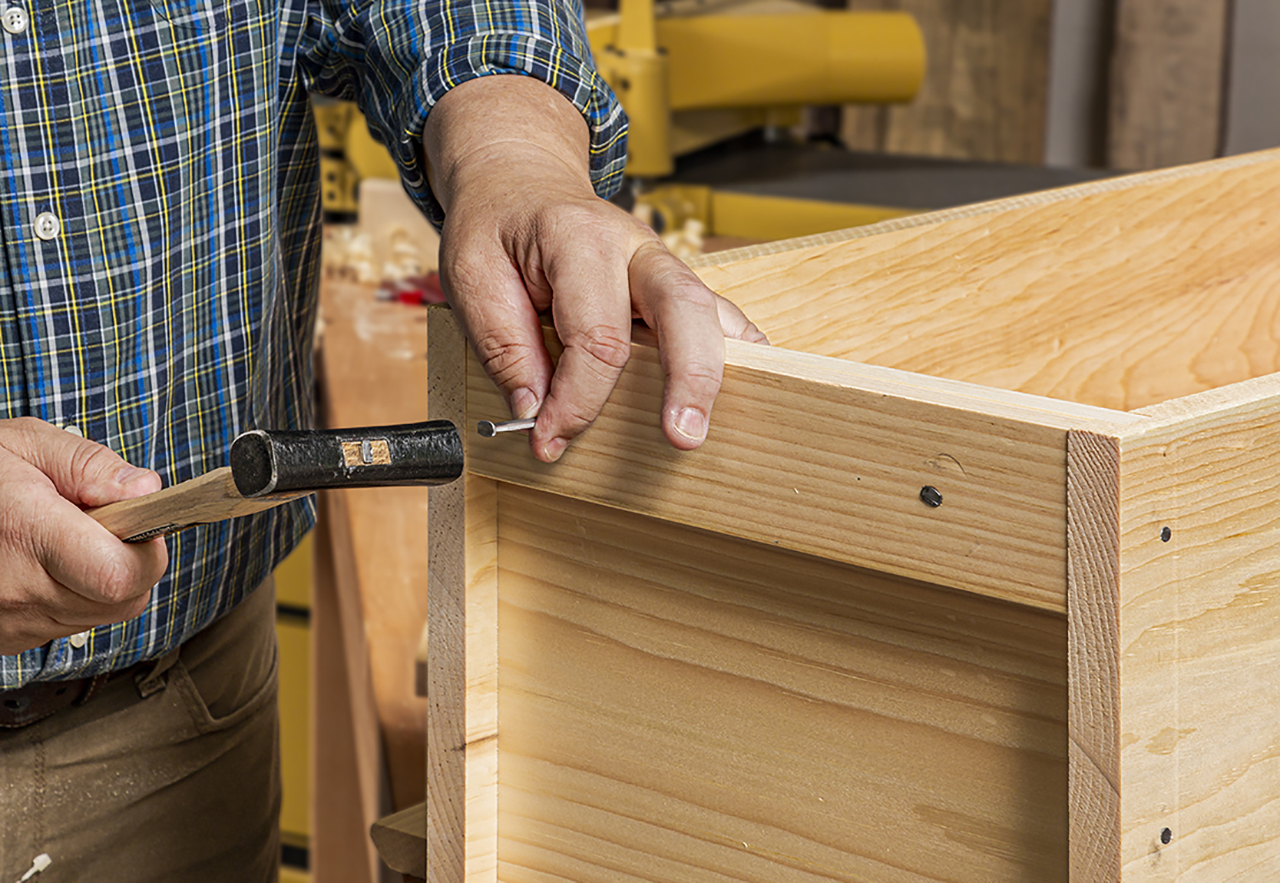 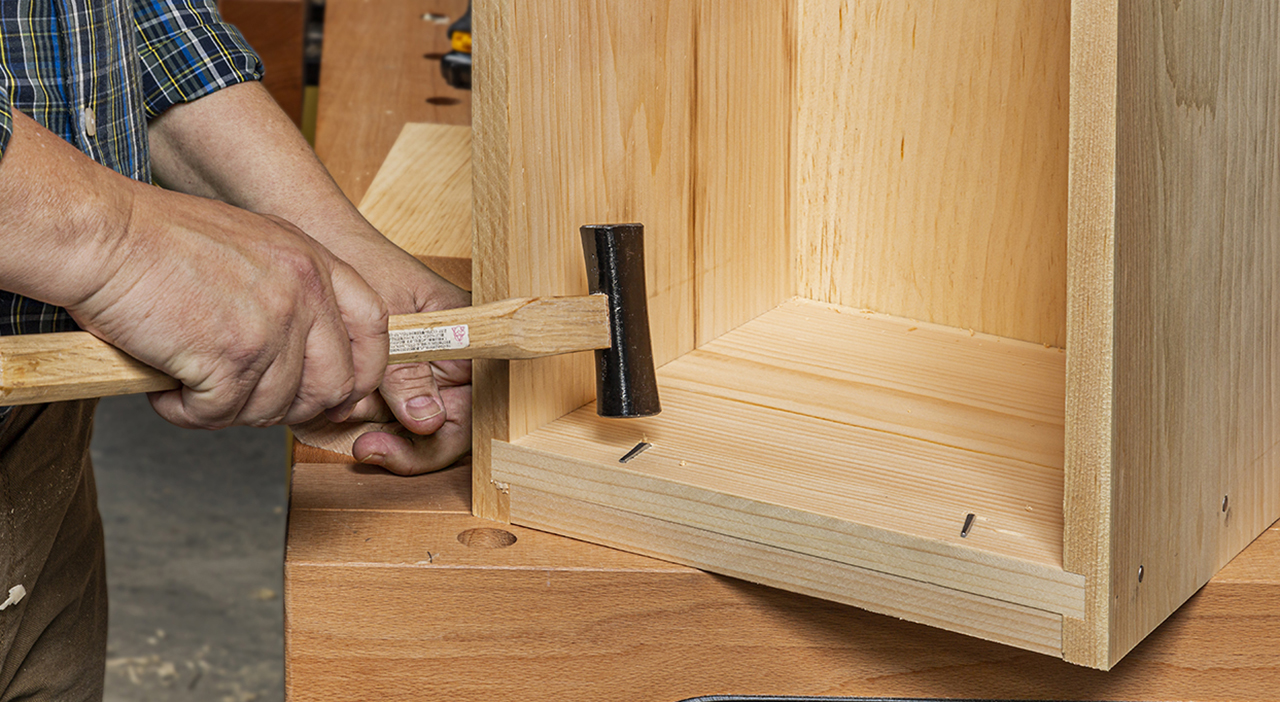 I used longer (2-1/2") nails and clinched them over inside the box for added strength on the handles.

Next, I made the handles. The handles fit between the sides, flush with the top of the box. I used a Japanese smoothing plane to chamfer the inside edge of the handles to make them easier to grip.  I made a mark about 1/4" from the outside edge, then planed the inside edge at about 45° until I reached the mark. You can adjust the angle and the size of the flat to suit your grip.  I used longer, 2-1/2" nails to attach the handle and clinched over the points protruding into the box. 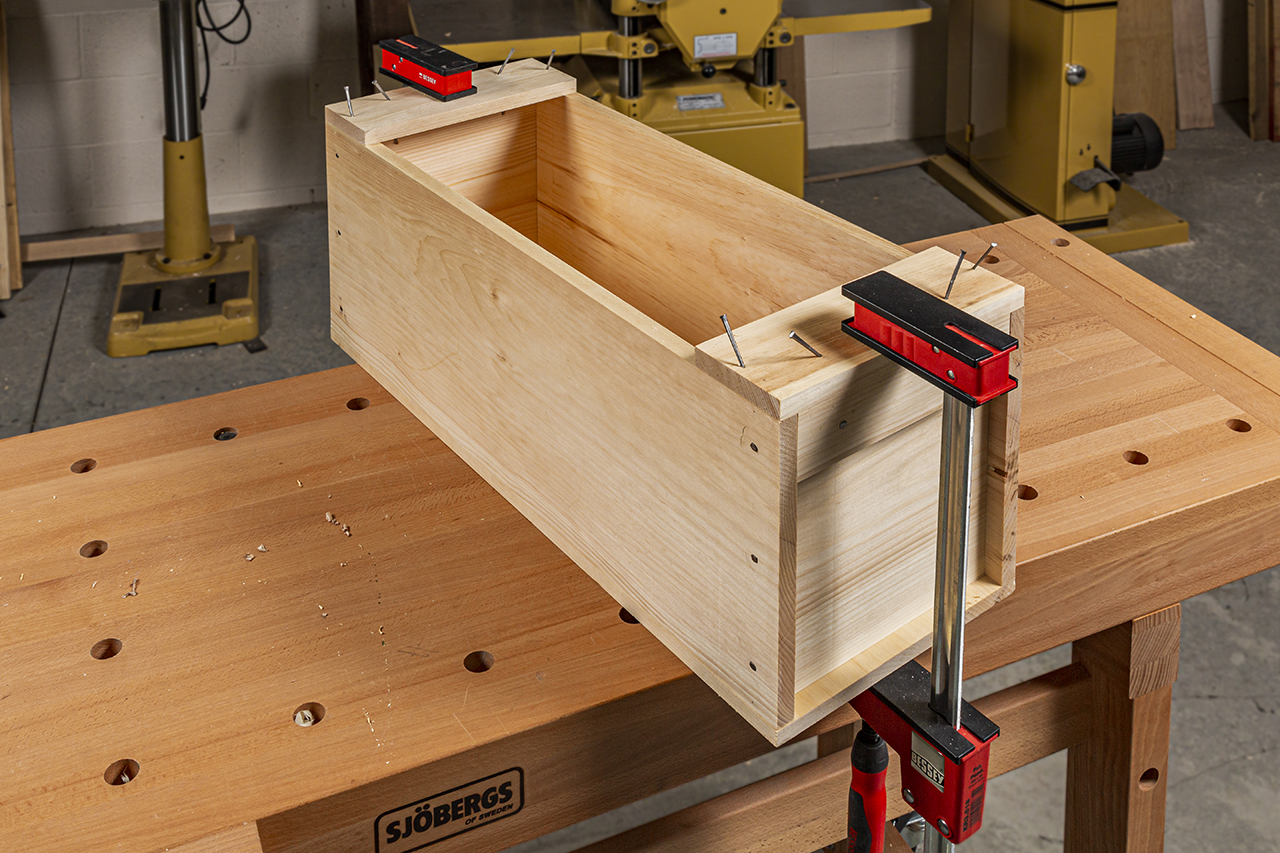 End cleats are nailed on at an angle, similar to the bottom. Cleats align flush with the sides of the box and the top of the handle.

Then it was time to add the part that makes this a Japanese Toolbox…the sliding top with the wedge lock. It starts with 4" wide cleats nailed to both ends of the assembled box. As before, I spaced the nails out carefully and drilled the pilot holes at an angle to increase holding strength. 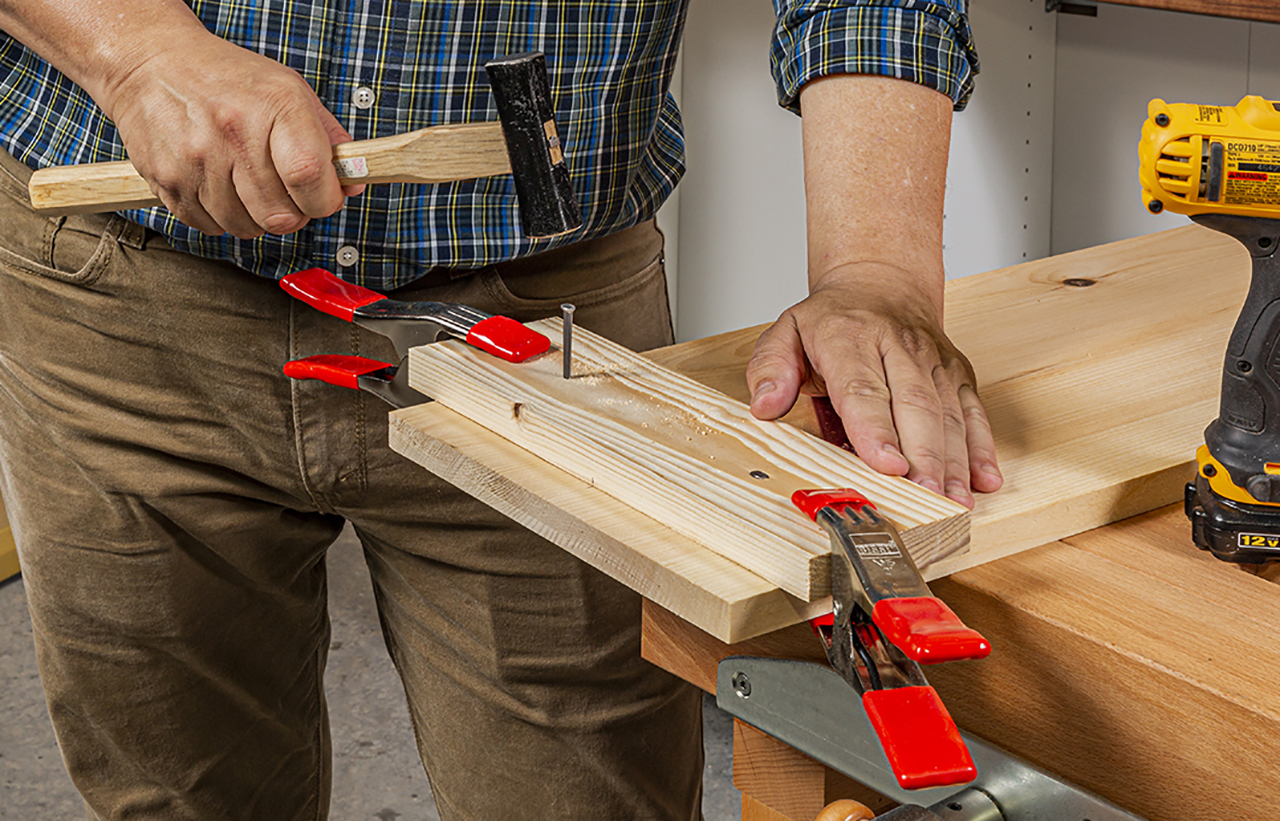 Fixed batten is 2-1/2” wide and nailed one inch from the end of the lid.

The battens for the top of the lid should be cut to length equal to the width of the finished box. The first batten is 2-1/2" wide and nailed 1" from the end of the lid. I used 2-1/2" nails and clinched them over, like the handles. 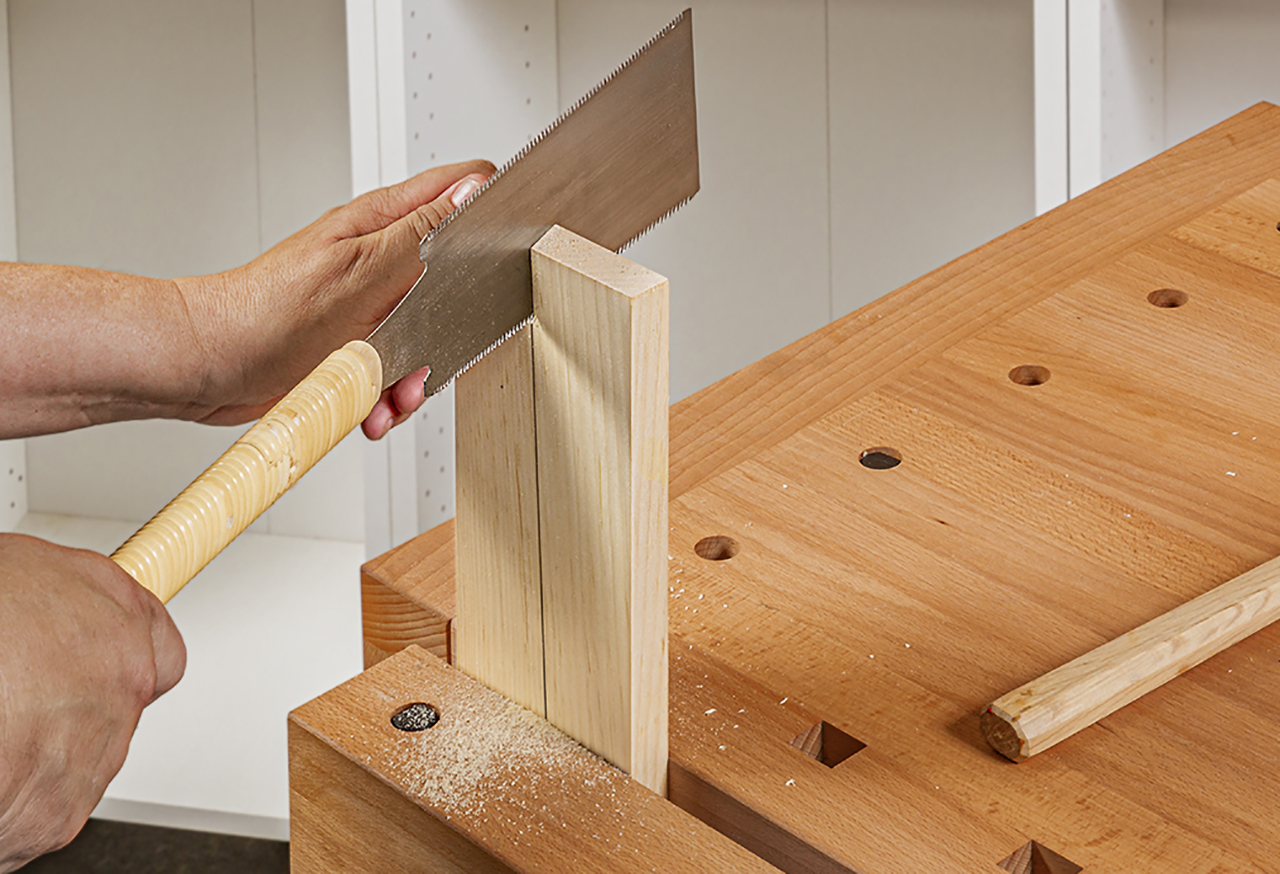 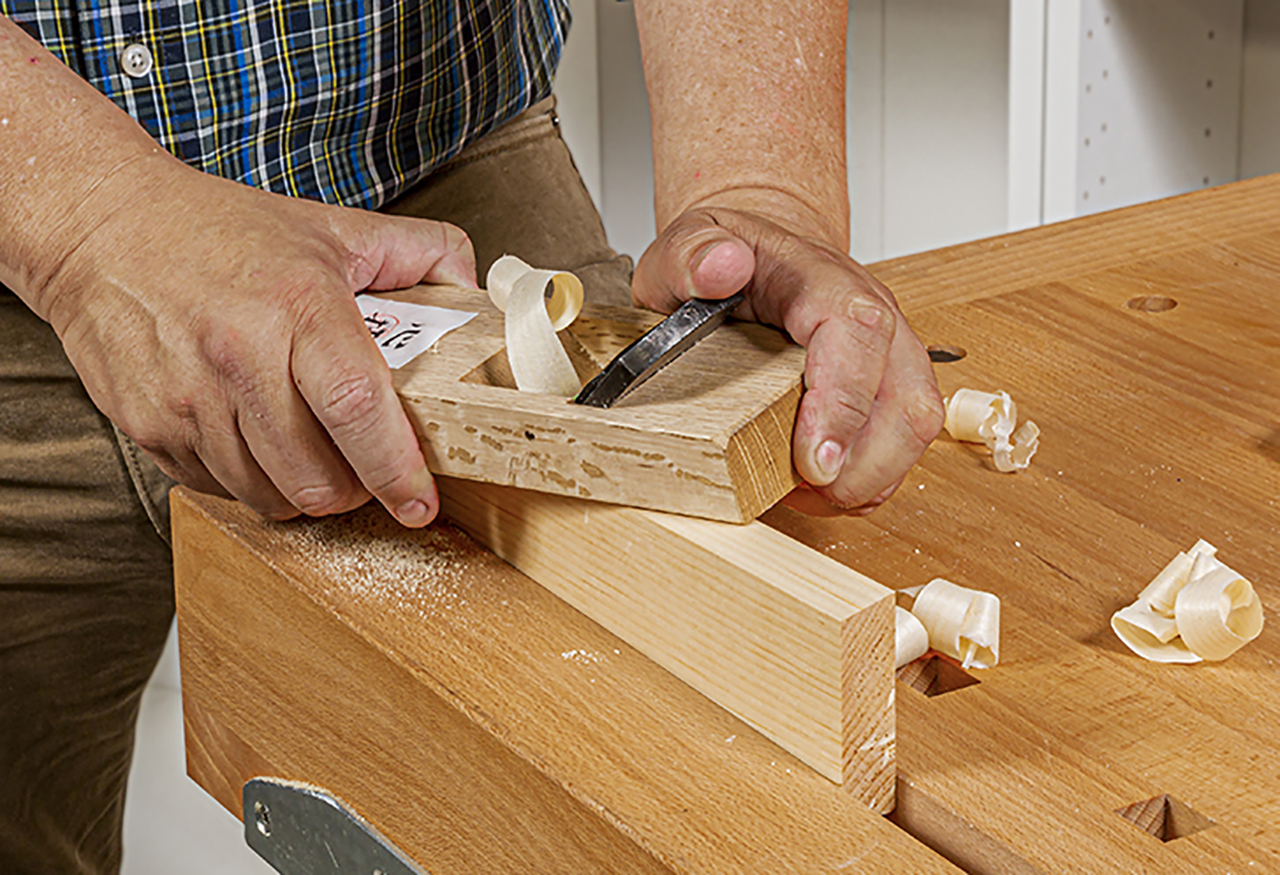 The locking batten is sawn in two, with angles in both directions and the sawn edges are smoothed with a plane.

The second batten forms the lock. I looked at the tapered wedge, trying to figure out how to set up a table saw to do it, then realized I could do it by hand before I could find my taper jig. It’s just a matter of ripping a 5" board at something in the neighborhood of a 5° taper in two directions. I marked one end 2-3/4" from an edge and the other end 2-1/4" from the same edge. Then I connected the two marks, giving me my 5ish-degree taper. I ripped along this line with the saw not perpendicular to the board (the amount of bevel isn’t important…just so there’s some). Now all I had to do was smooth out the cut with a plane and keep the bevels close to how they were cut. It sounds complicated, but in truth, if you keep your cut reasonably straight with the layout line, it’s hard to mess up. I softened all the edges with a block plane before moving on. 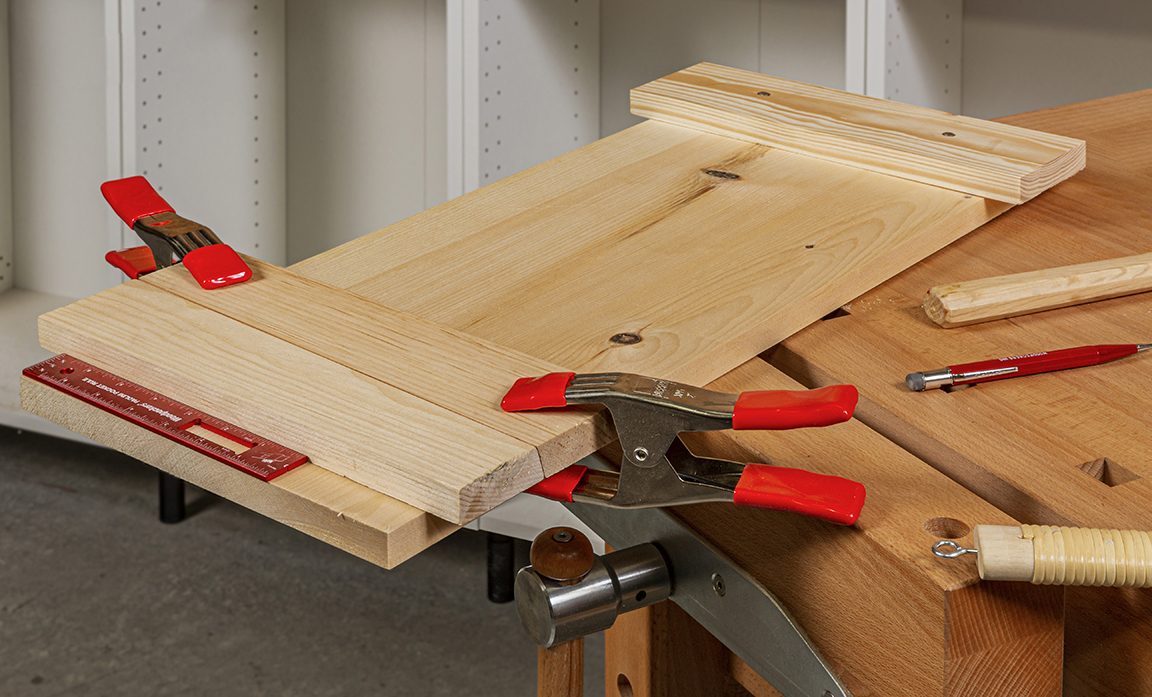 Position the two-piece batten mated together, with the outside section one inch from the end of the lid. Nail the inside half only. The outside half becomes the locking wedge.

I held the two-part batten together, with the inside half bevel-facing-down.  I lined it up with the outside-half 1" from the end of the top, clamped everything in place and drilled pilot holes in the inside half-batten only. It gets nailed and clinched to the top. The outside half becomes the lock. Drop the top in (lock end first), slide it over until the fixed batten hits the cleat, then press the tapered wedge batten in place. The lid isn’t going anywhere until you tap the wedge back out. 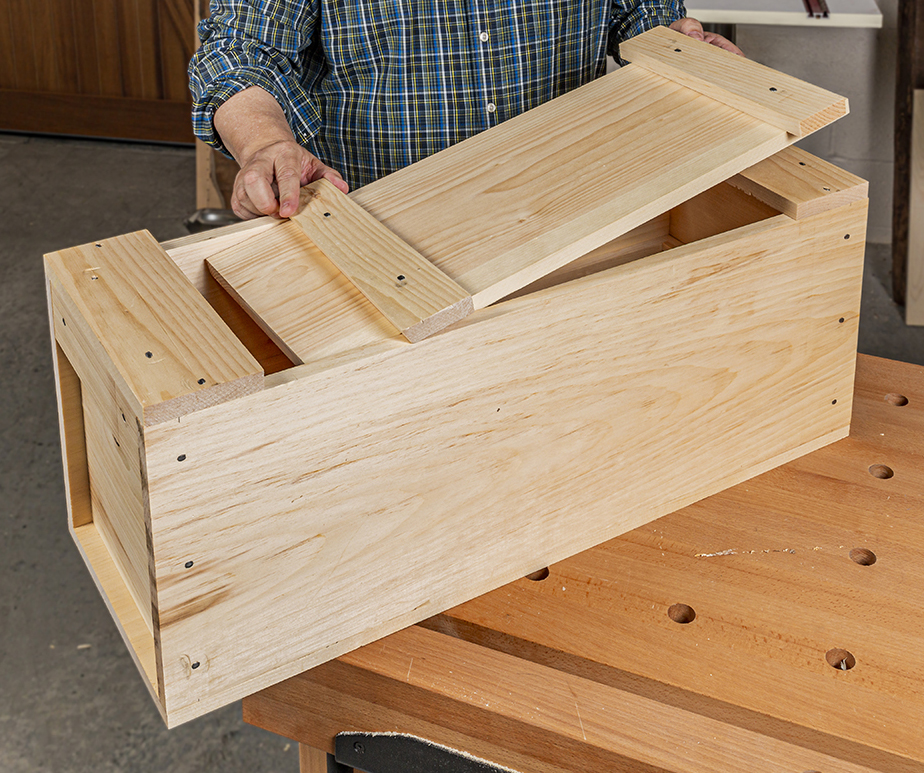 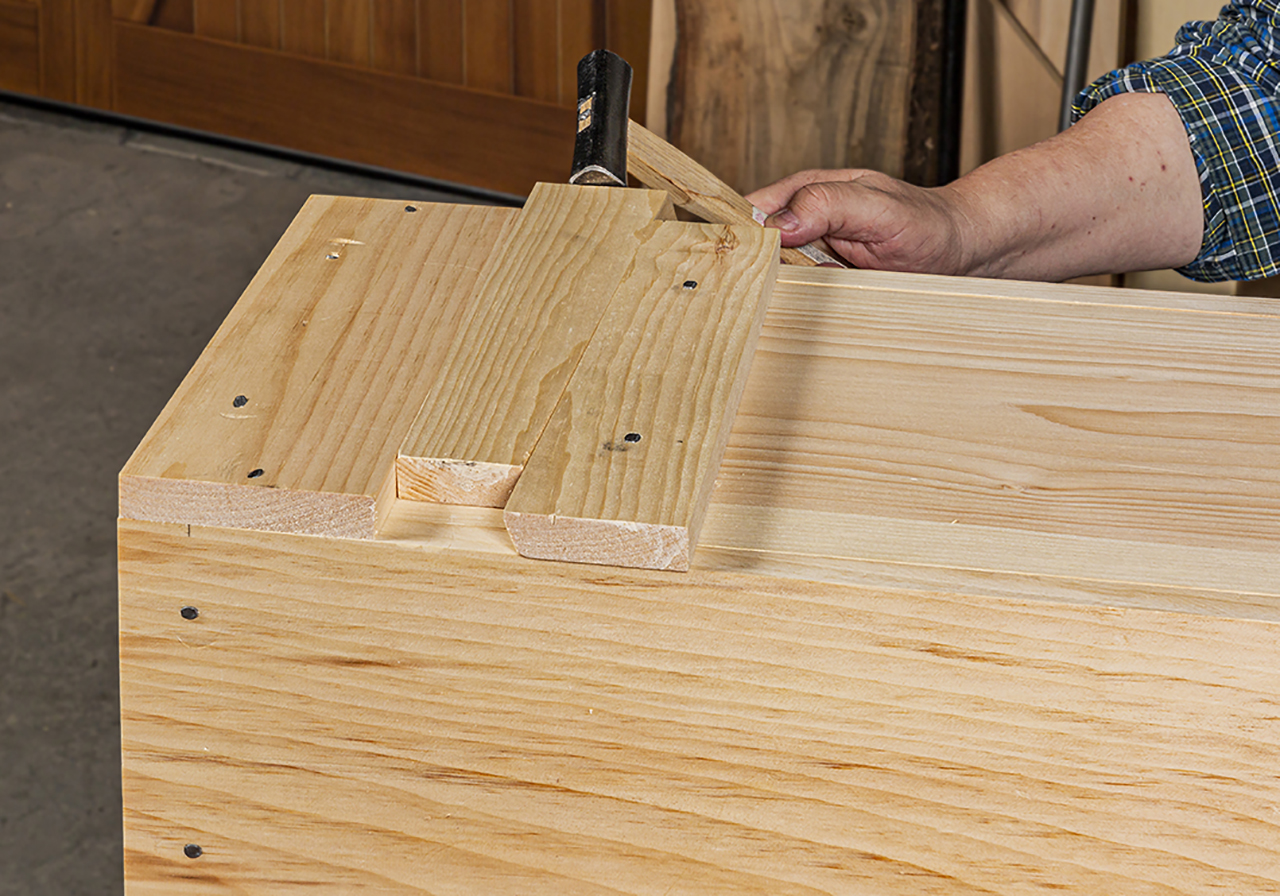 Now tap the wedge in place and the box is secure.

From here, you can customize the toolbox as much or as little as you want. I’ve seen them with elaborate trays, with a place for each and every tool to fit perfectly, and I’ve seen them left as a vast, empty cube.

Finish is another personal choice. I prefer the look these boxes have after several years of daily use with no finish on them. However, if I were using the design to make a presentation box for a gift, I might opt for a hand-rubbed oil finish.

I’ve yet to show someone this locking mechanism and not have them marvel at its elegant simplicity. I hope you’ll enjoy building, using and showing off yours, too. 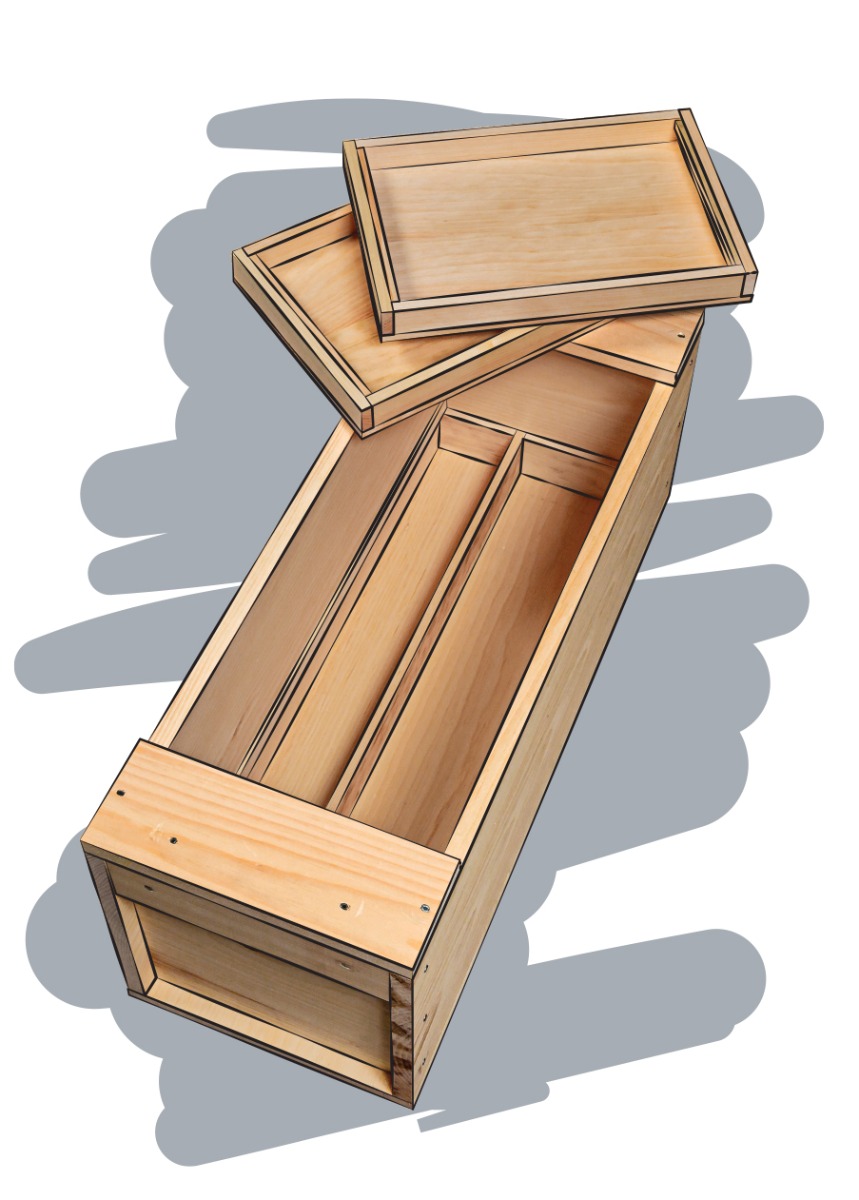 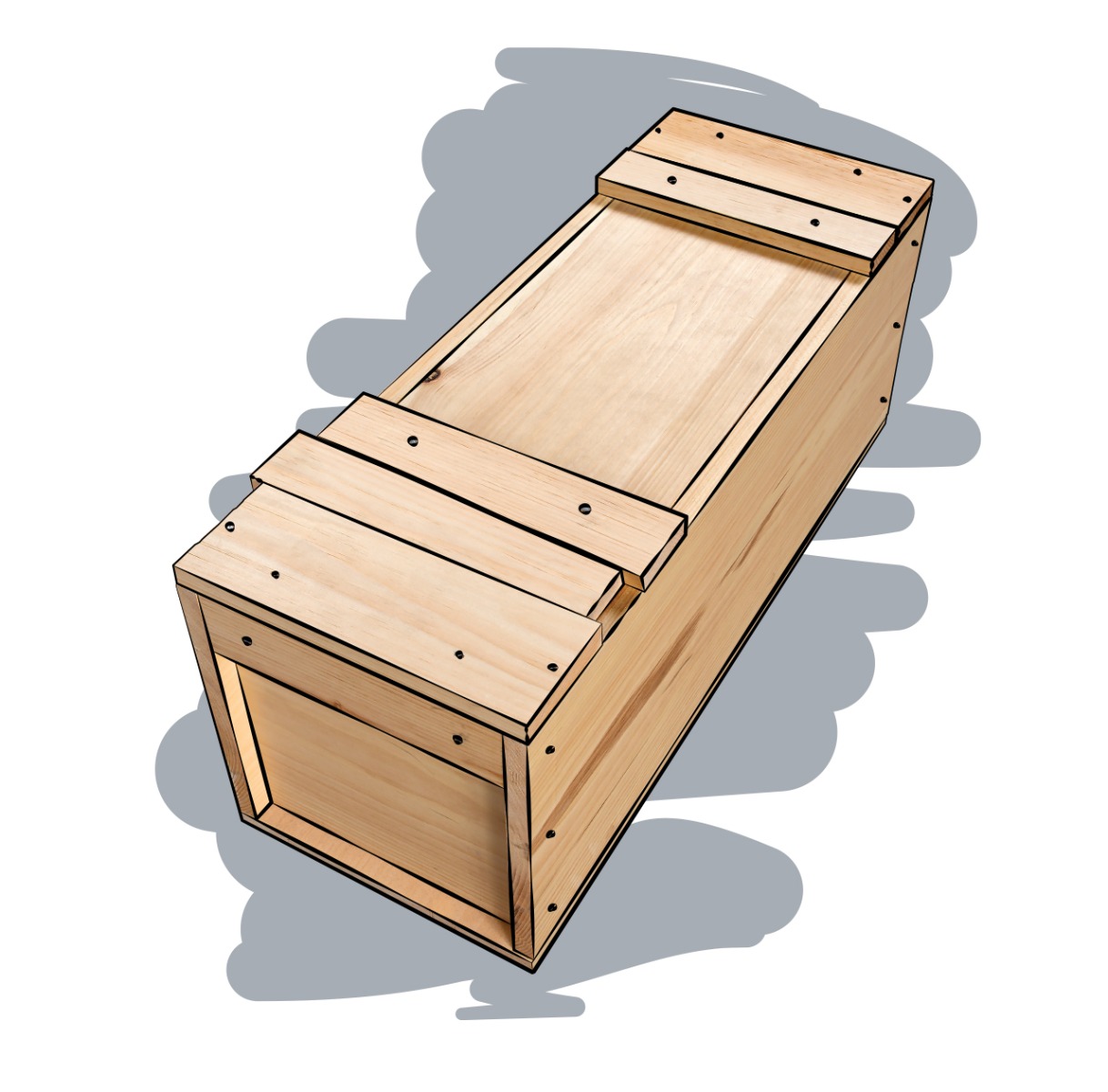 Build trays and dividers as desired, or just fill it up as is!