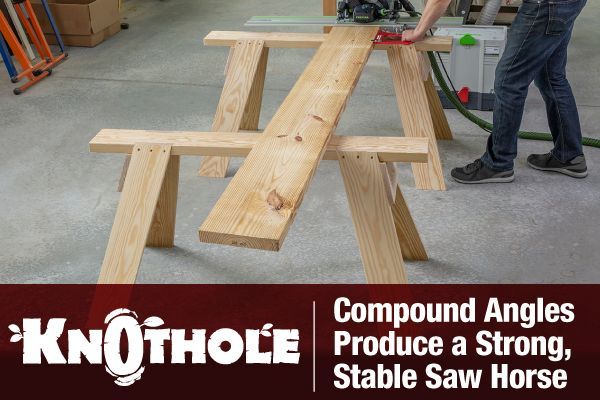 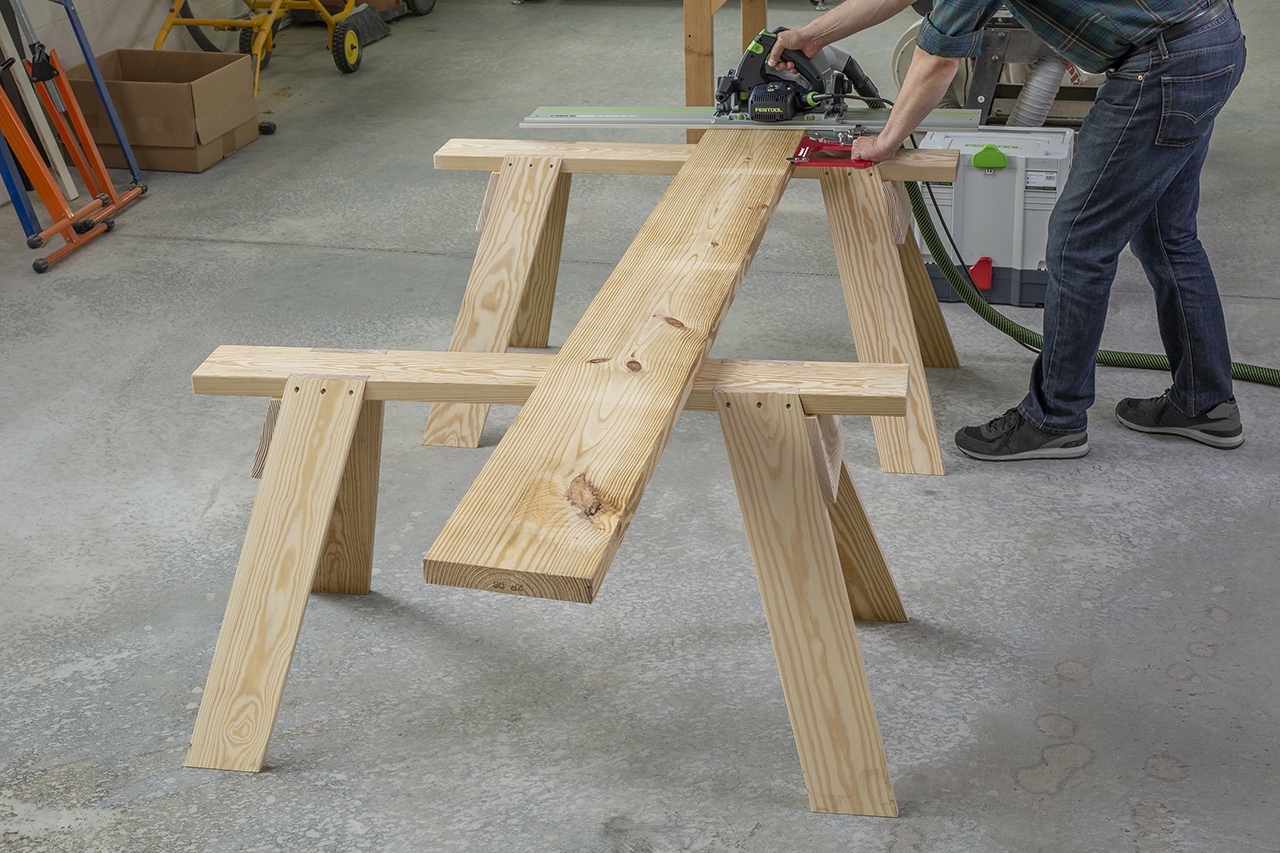 I’ve used the same pair of saw horses for over 40 years. In that time, they’ve seen thousands of cross-cuts and rips, but they’ve also served as a makeshift workbench, a step ladder, scaffolding, a finishing platform and a lunchroom bench. They’ve seen new construction, home remodeling and lots of furniture projects. Every paint splatter conjures up memories of a project and every errant saw kerf reminds me not to work too fast or when I’m too tired.

Dad taught me the value of a good pair of saw horses while I was still in school. He and a cabinetmaker from the small town where I grew up both told stories of showing up at a job site, being given one 2x6 and two 1x6s and having their job depend on what the foreman thought of the horses they would build. Ed Christy (Dad’s cabinetmaker buddy) favored a design published in an adult education text book published right after World War II. He loaned me a dog-eared old copy of the book and Dad helped me make a set.

What makes this design so versatile and durable is the compound angles used for the legs. The splayed legs create strength and stability without adding weight. My old set still has lots of life left, but I wanted to give them a semi-retirement, so I decided to make a new pair. I took measurements from my old set and one of our talented product developers put them in our CAD program to figure out all the angles. With Greg’s help, I put together a plan that is a very close replica of the horses Dad and I built in 1978 from plans first published in the late ‘40s. I made them a couple inches taller, since I don’t bend as easily as I did 40 years ago. 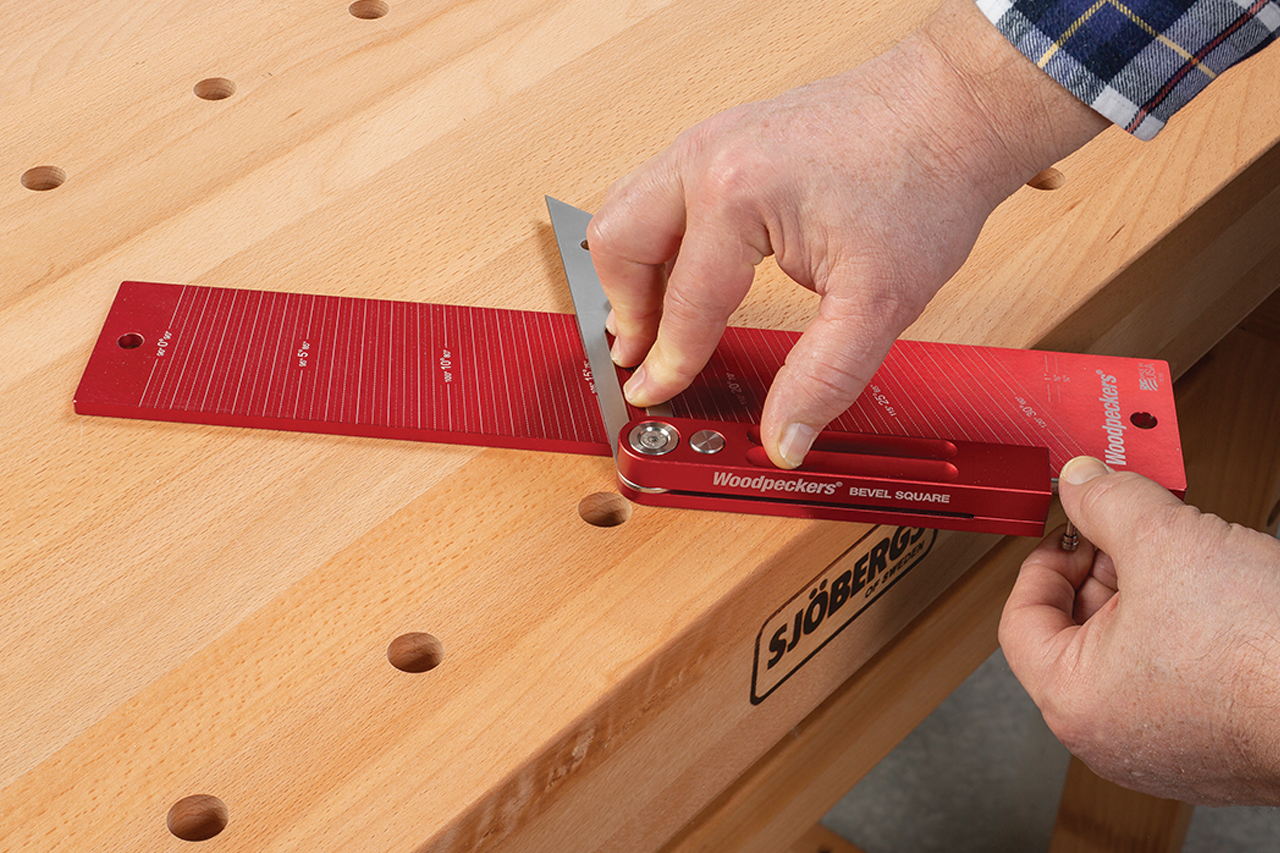 Woodpeckers Bevel Square and Angle Reference Plate simplify setting and checking angles down to fractions of a degree. 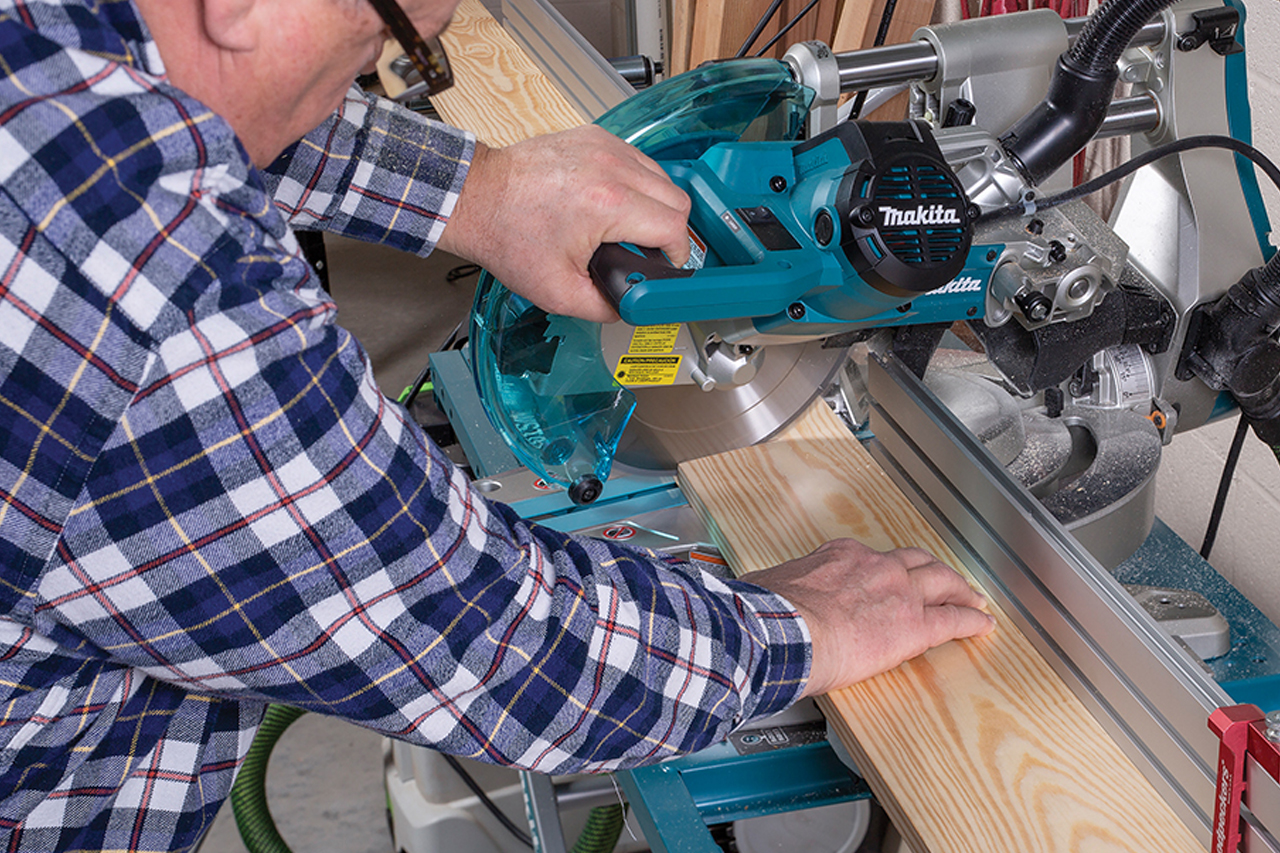 Cutting the compound angle legs. Saw blade tilted to 20° and turned to 15° from the fence. I used stops to make sure all 8 legs were the same length.

I started by cutting the legs. I set my miter saw to a 20° bevel angle and a 15° miter angle. I cut 8 legs out of 1x6’s. Each leg measures 28” from long point to short point. The first compound angle issue shows up on the edge of the legs. Since the legs are going away from the saddle at two angles, the leg edges aren’t parallel to each other and they intersect the saddle at an angle. The easiest way to compensate for that is to rip the edges to a 5.38° bevel. I interpolated the angle by setting my Bevel Square against the Angle Reference Plate slightly more than 5.25° and slightly less than 5.50°. I set my table saw blade to the Bevel Square and checked the cut on a piece of scrap stock.

Aligning the edges of the legs for the bevel cuts was a little tricky. After a couple failures I figured out a relatively simple way to keep things straight. I ripped the first edge with the long point of the miter leading into the blade and the end bevel facing up (see photos below). Then on the second edge, I flipped the board over so the long point was against the fence and the end bevel was facing down. You can tell if you have it right by looking straight down at the beveled end of the leg. The edge bevels should make the beveled end appear perfectly square. 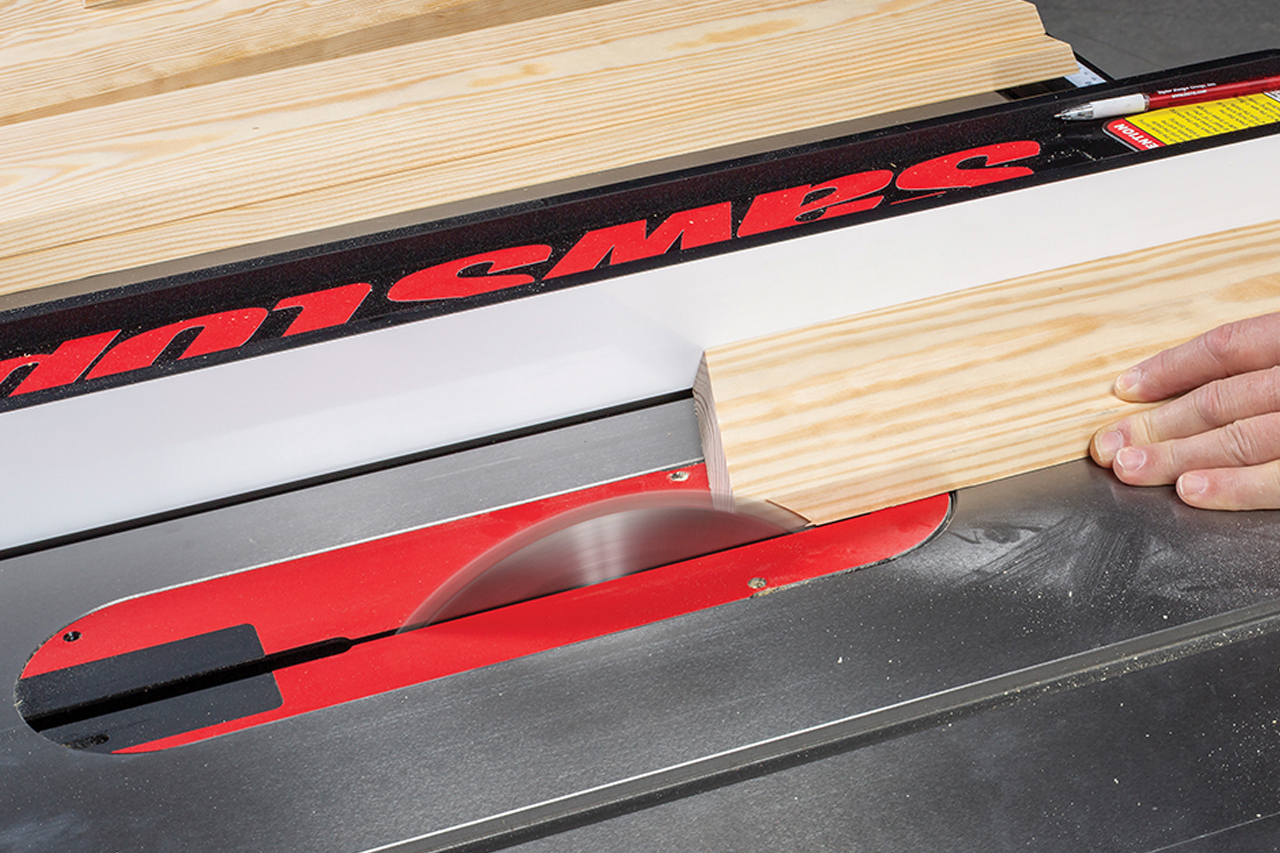 Table saw blade tilted to 5.38° (away from rip fence). First cut is long point leading in and end cut angle facing up. 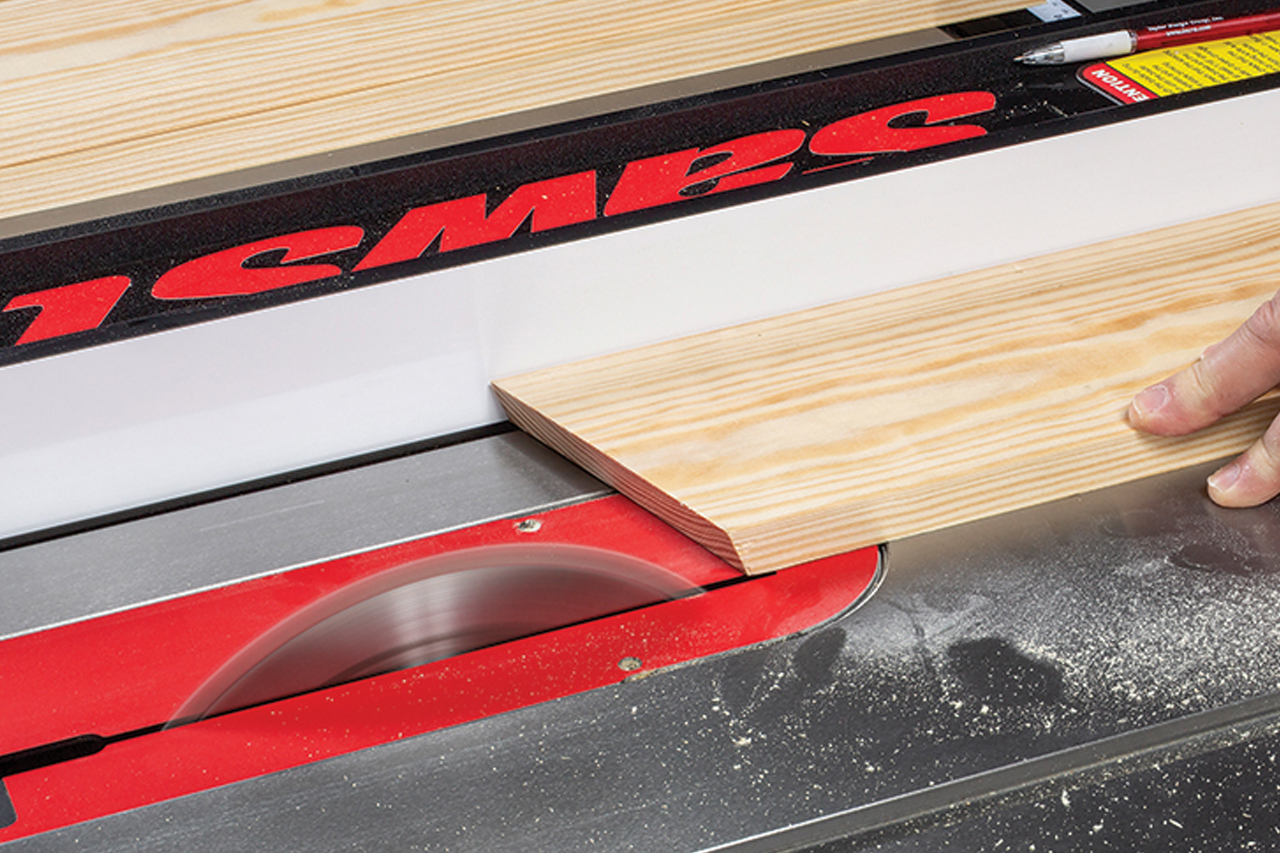 Second cut is long point against the fence and end cut angle facing down. 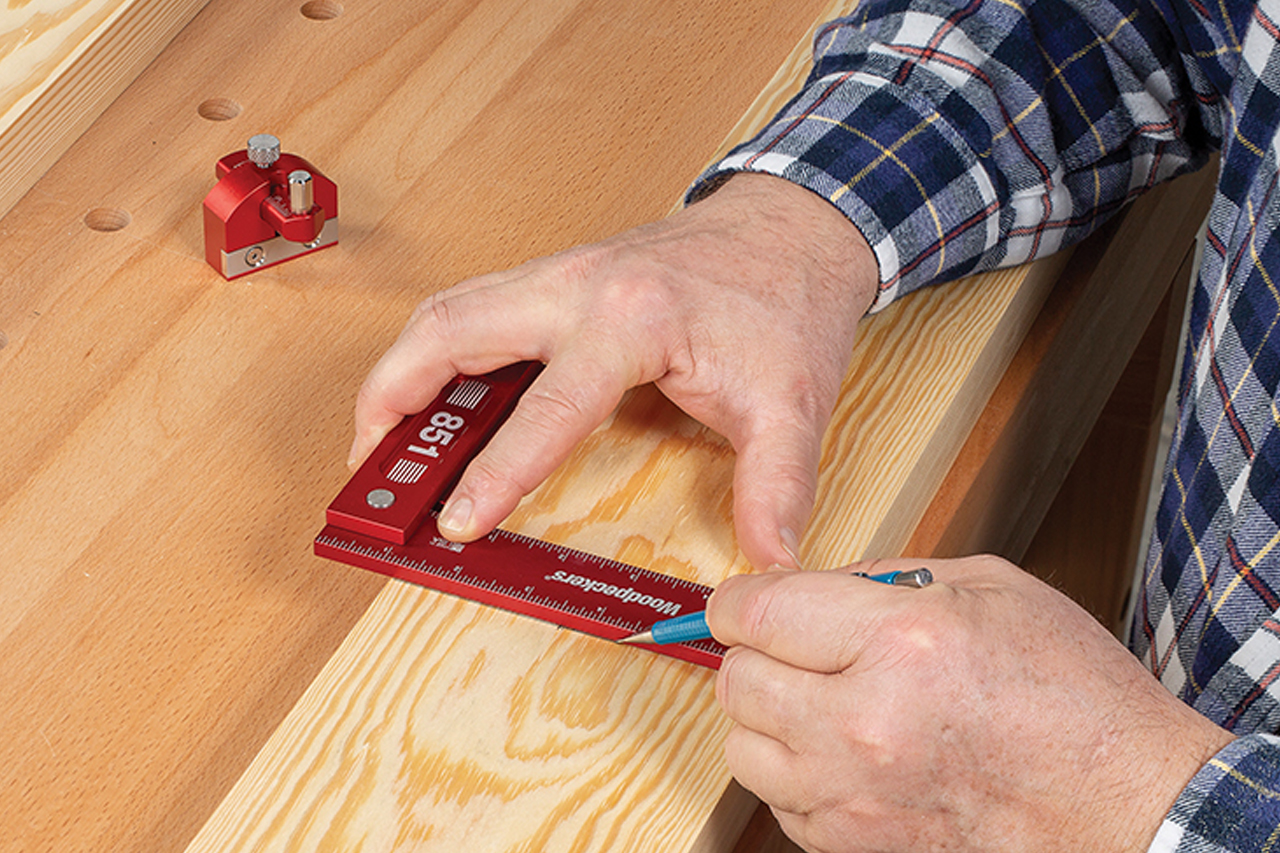 Strike a line square across the saddle and 6-7/8” from the end.

With the legs complete, it was time to cut the saddles. I cut two 48” long sections of 2x6, squaring both ends. I selected the side I wanted to face up and marked a line square across both ends of both boards 6-7/8” from the ends. I carefully measured the beveled end of the legs for both width and length. I marked another line square across the saddles the length of the beveled end of the leg away from the first line. I kept this spacing a little on the tight side, as my mortises tend to grow a little as I clean them out. I used a marking gauge to scribe a line parallel to the edge of the board the width of the beveled end away the edge and joining the two perpendicular lines. I repeated this on the remaining seven leg mortise locations. 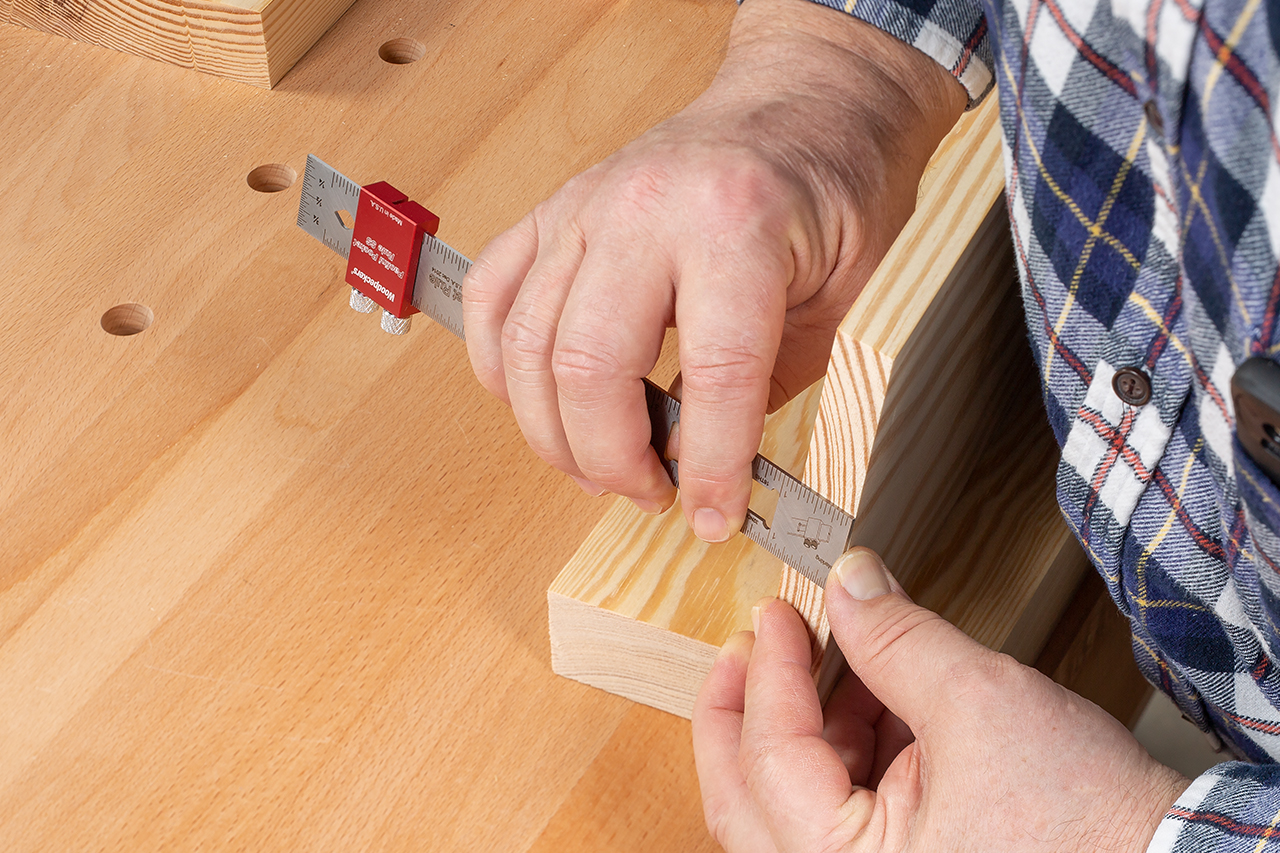 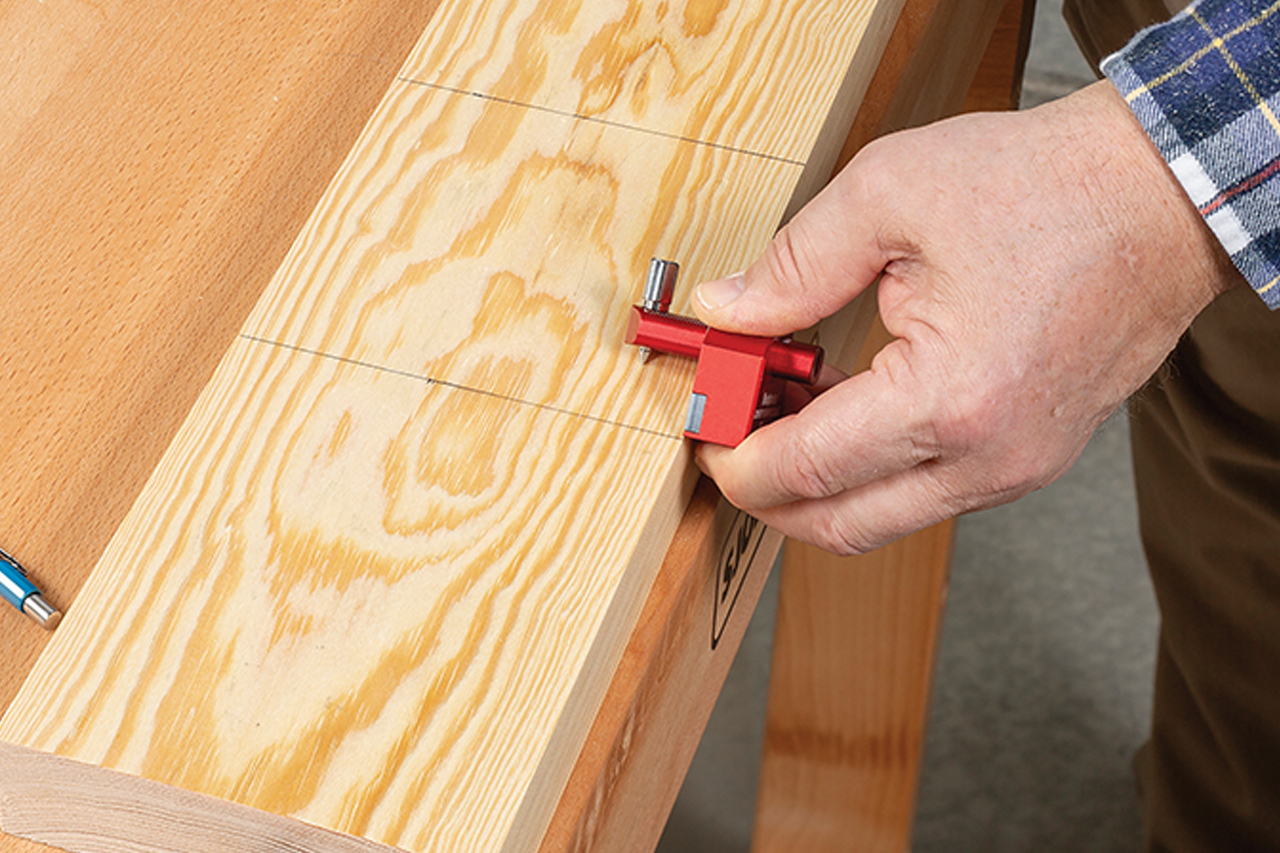 Set a marking gauge to the width of the beveled end and scribe a groove between the two square lines.

The compound angle for the intersection between the edge of the saddle and the side of the leg is 15.92°. Using the Angle Reference Plate, I set the Bevel Square where the angle was just barely less than 16°. I transferred that angle onto the mortise layouts on the edge of both saddles, making sure the angles ran toward the end of the saddles and intersected the square lines across the top. Next, I rolled the saddles over and marked a line square to the edge and intersecting the edge bevel lines. 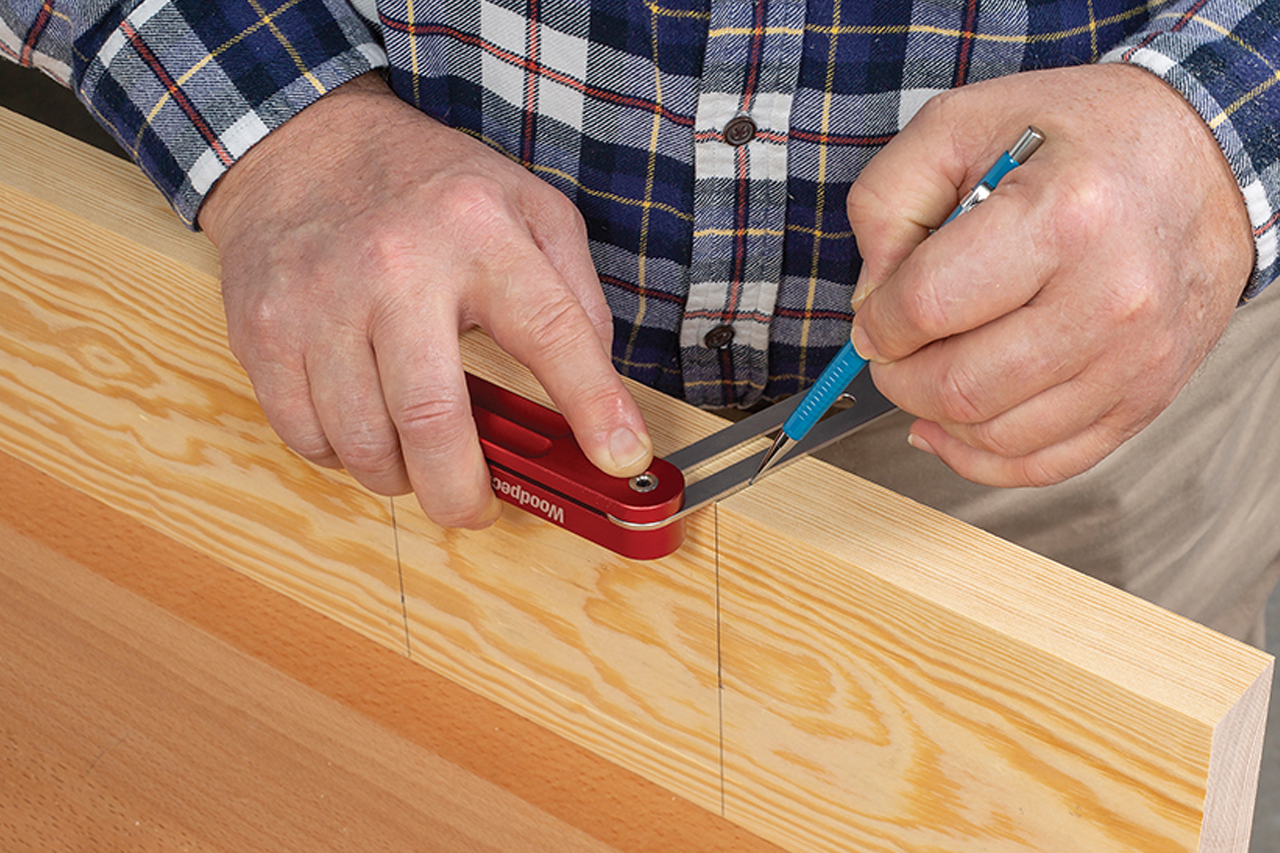 Set the Bevel Square to 15.92° and mark the edge of the saddle. Make sure the angle runs toward the end of the board. 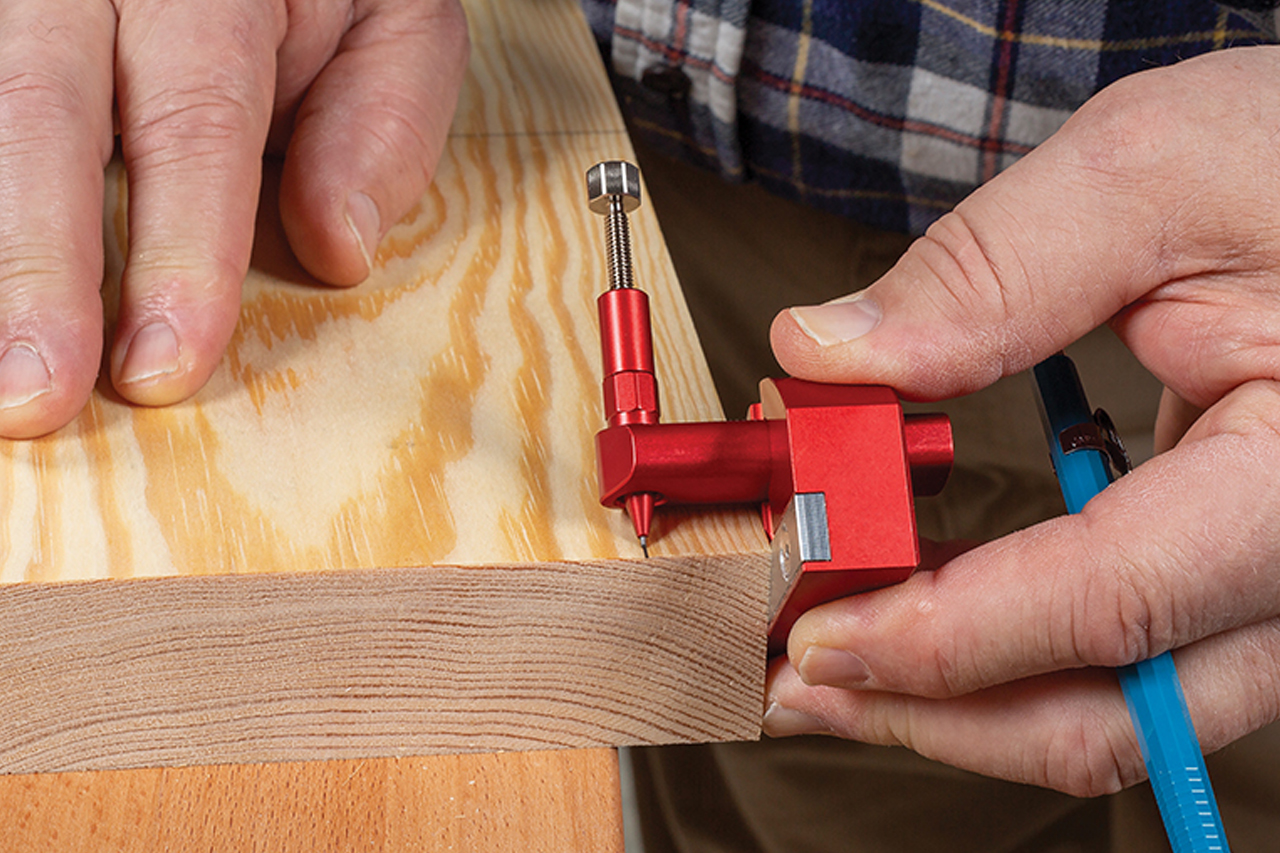 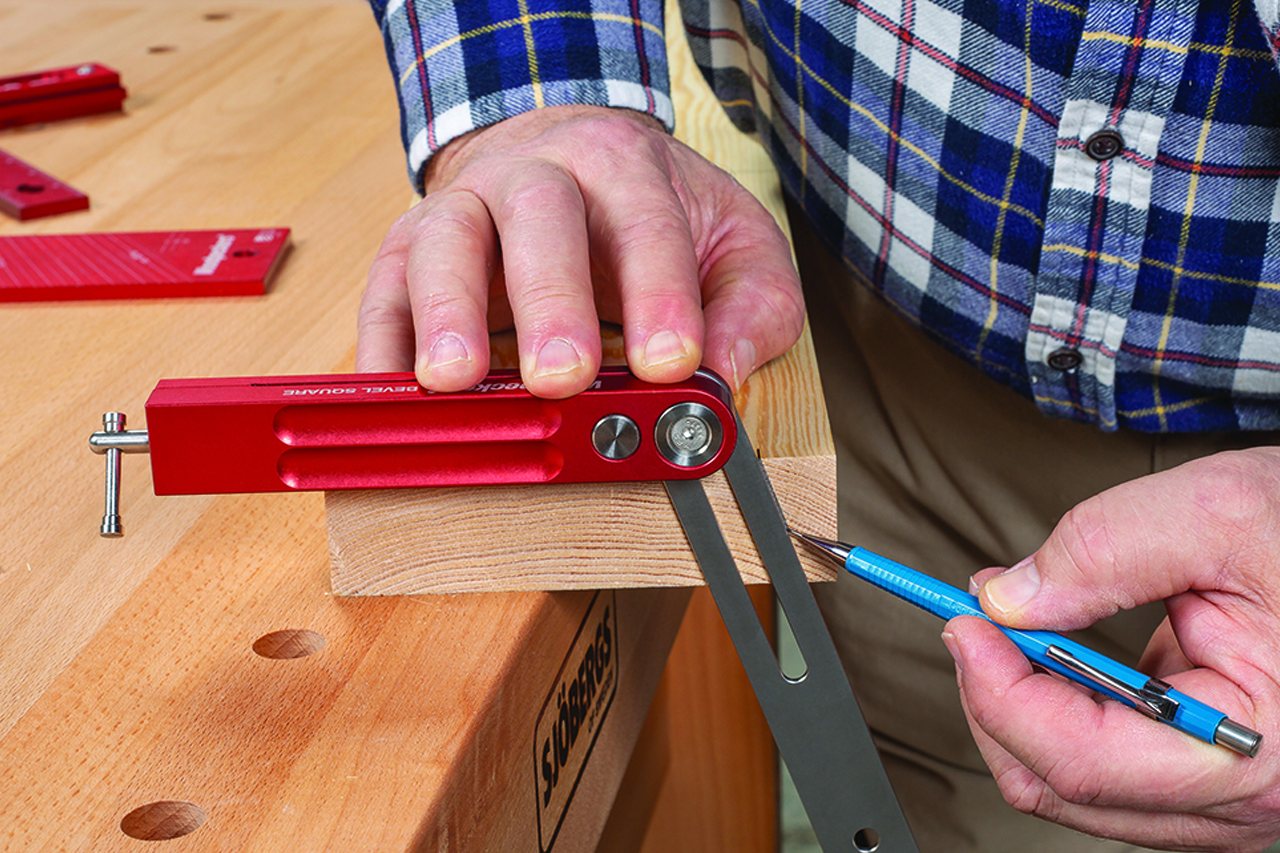 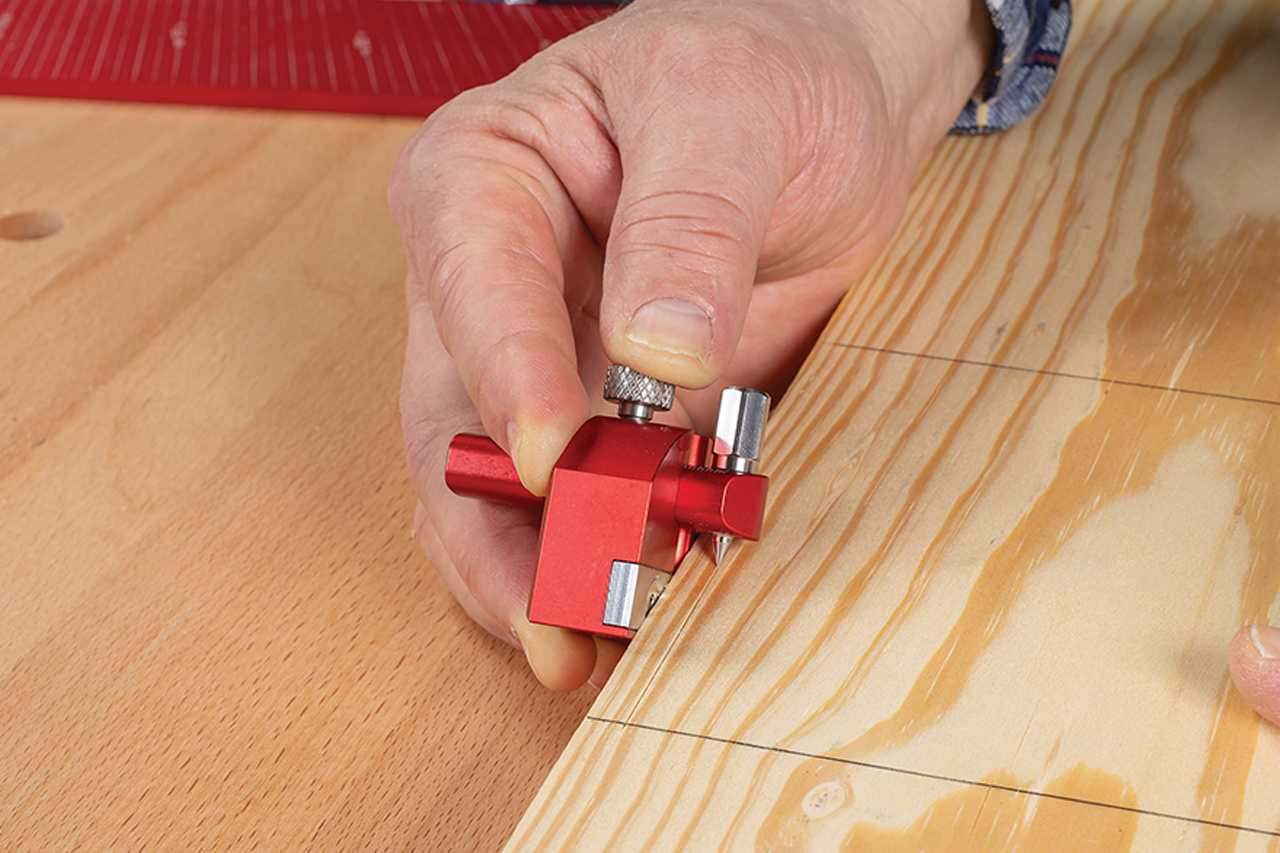 Mark the width of the leg at the end of the saddle and strike a line at a 20° angle. This gives you the width for the mortise on the bottom of the saddle. Set your marking gauge and scribe a groove between the two pencil lines.

The only thing left of the saddle lay-out is to mark the depth of the leg mortises on the bottom of the saddle. I know the back of the mortise needs to be 20°, and I had the top starting point set on my marking gauge, so I just made a mark for the top width at the end of the leg, set my Bevel Square to 20°, struck a line down the end, and had my bottom width established. I transferred that measurement to my marking gauge and marked the underside depth limit.

With the leg mortises laid out, it was time to cut them. I carefully followed the line at the ends and made several more cuts between. I cleaned out the waste with a chisel, carefully paring down the 20° plane at the back of the mortise. 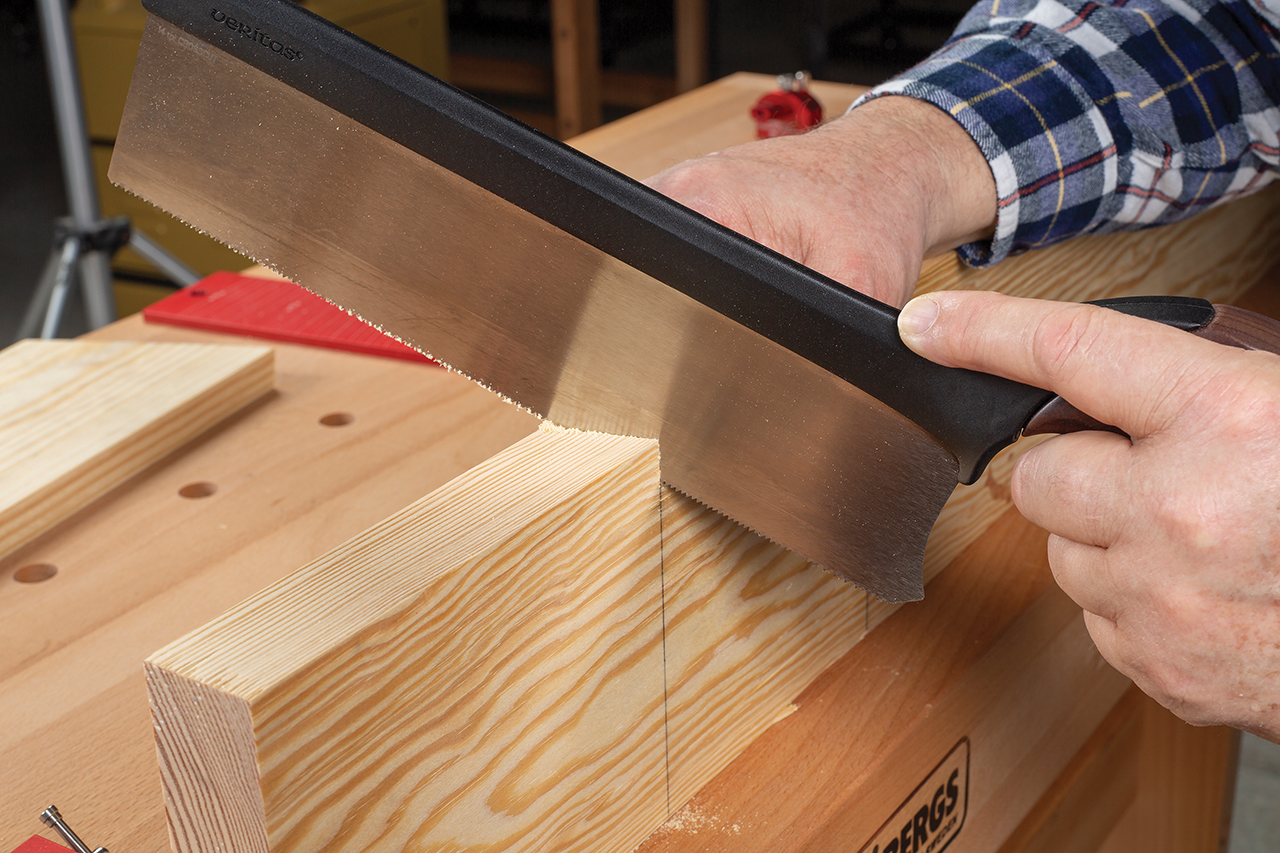 Carefully cut the mortise ends, stopping the saw cut at the scribed lines on both sides. Make multiple cuts between the ends to speed up the chisel work. 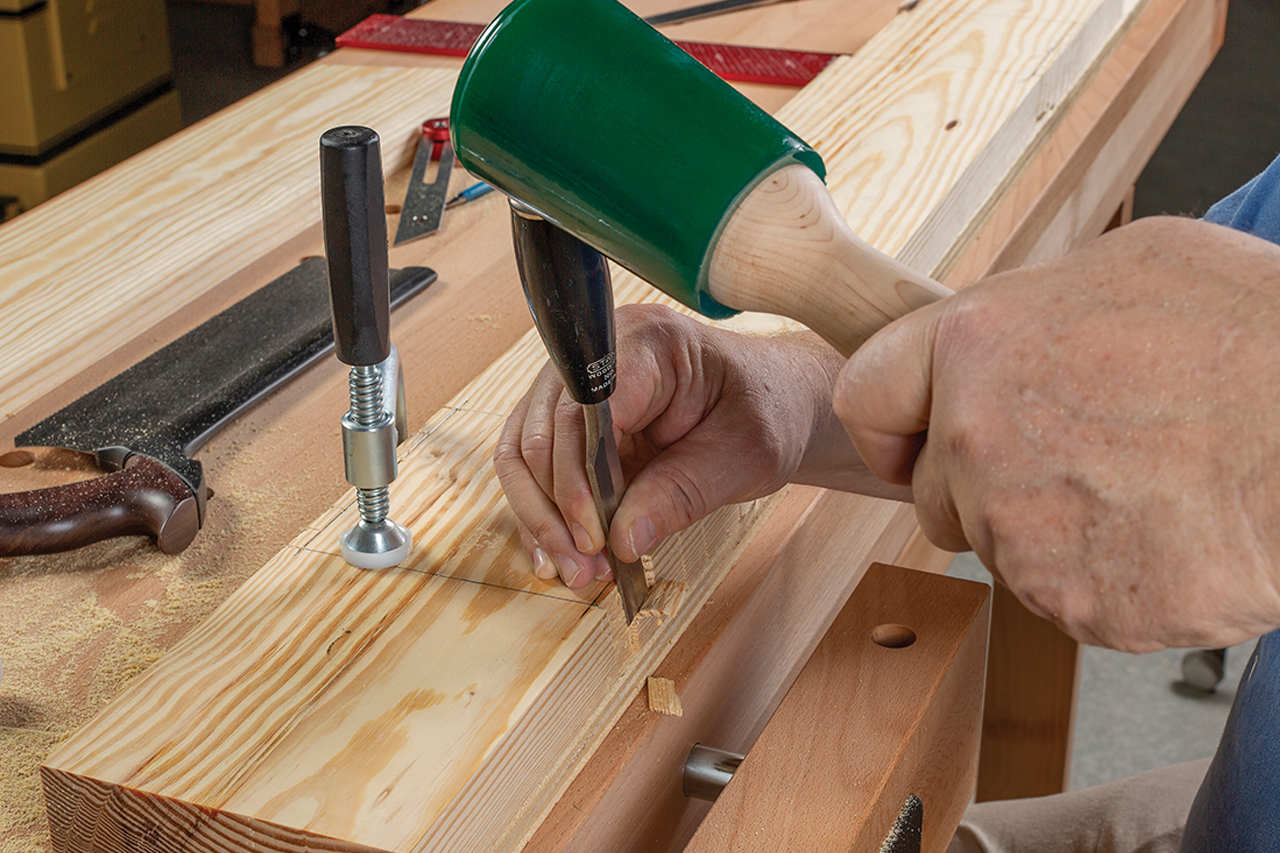 Knock out the bulk with a chisel and mallet. 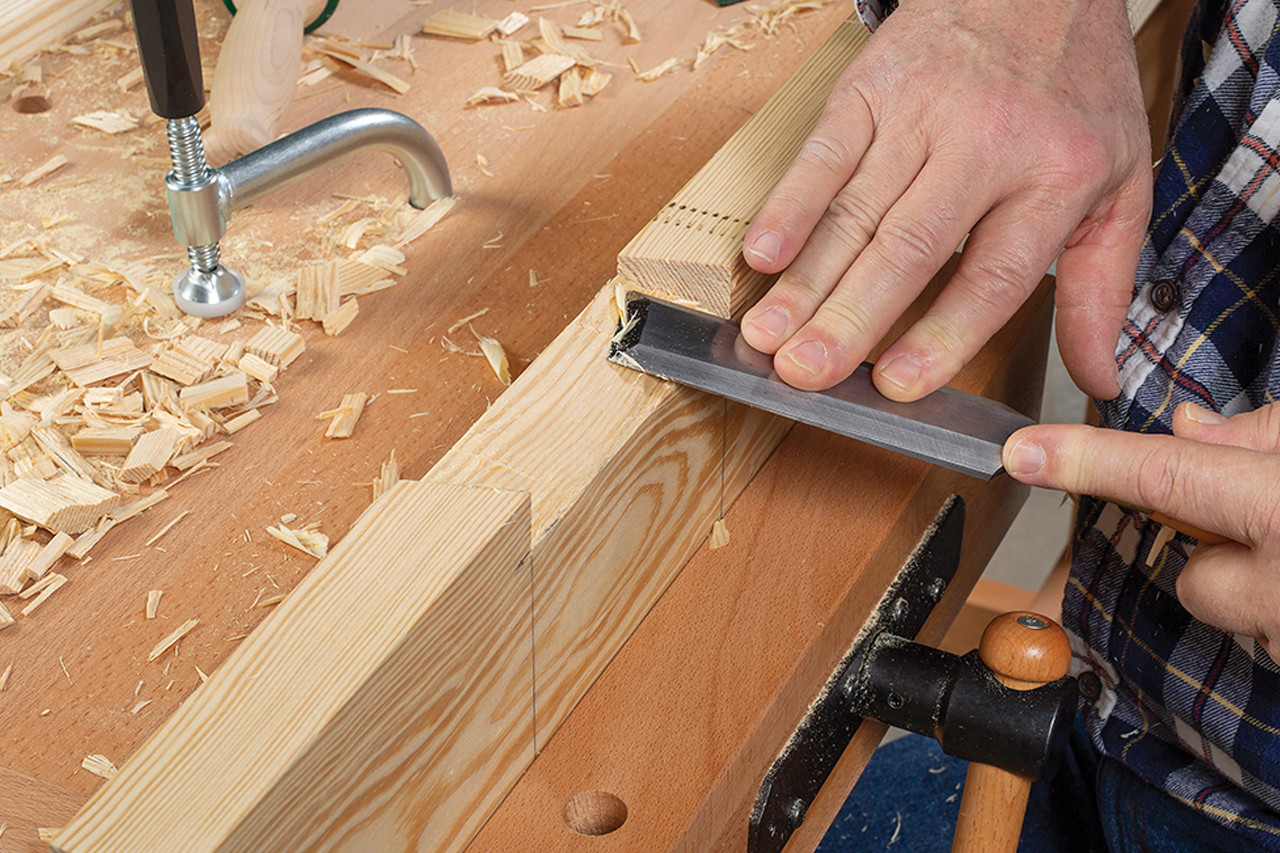 Use a sharp chisel and pare down to final dimension. 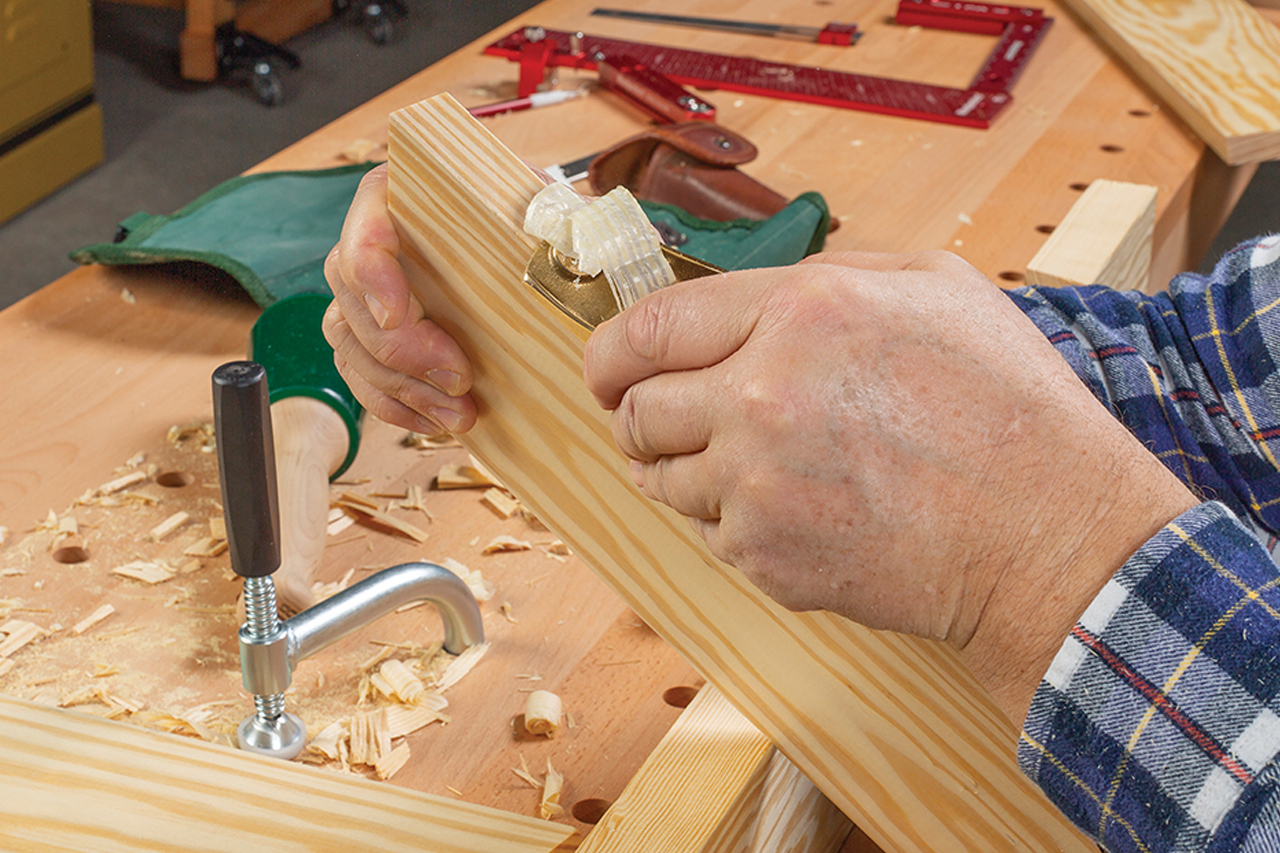 Test fit a leg into each mortise. Adjust the fit by planing the edges of the legs with a block plane. 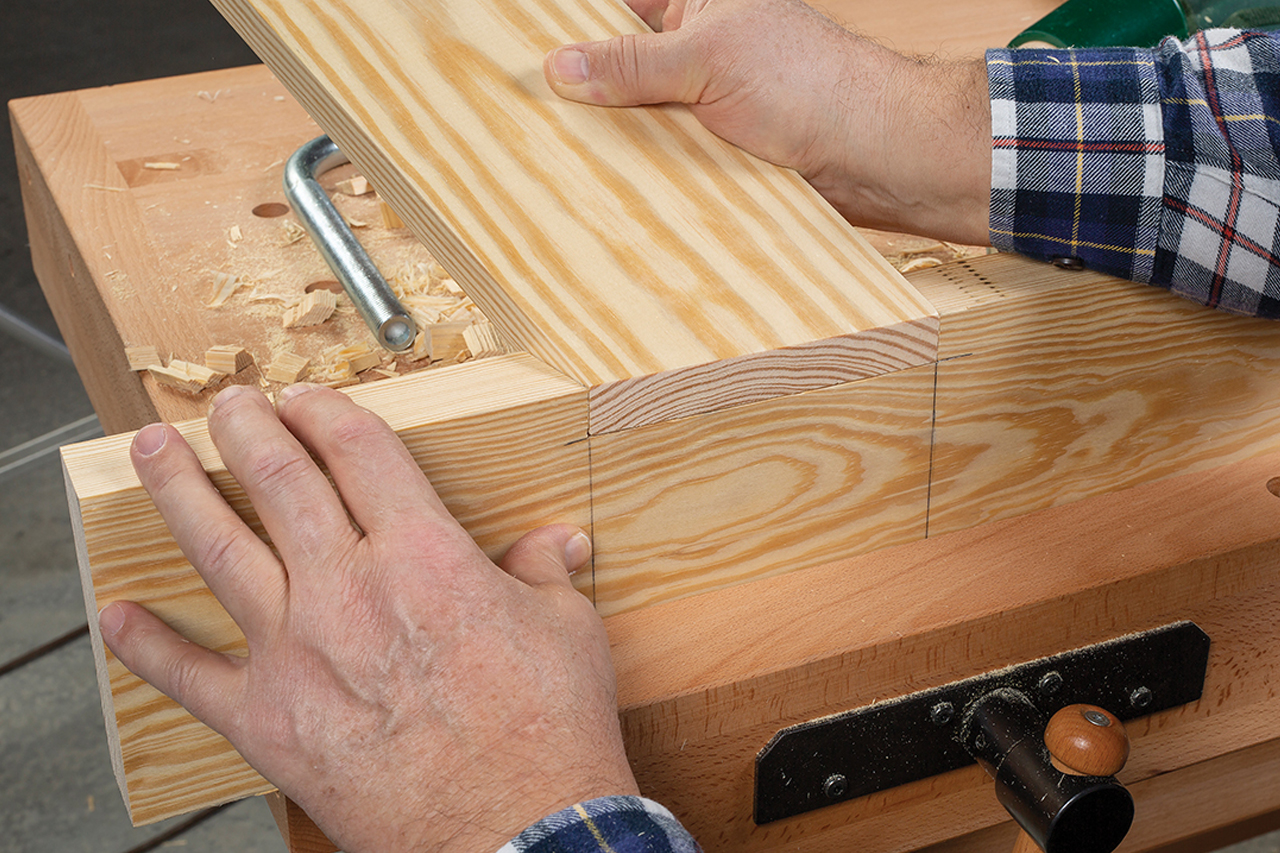 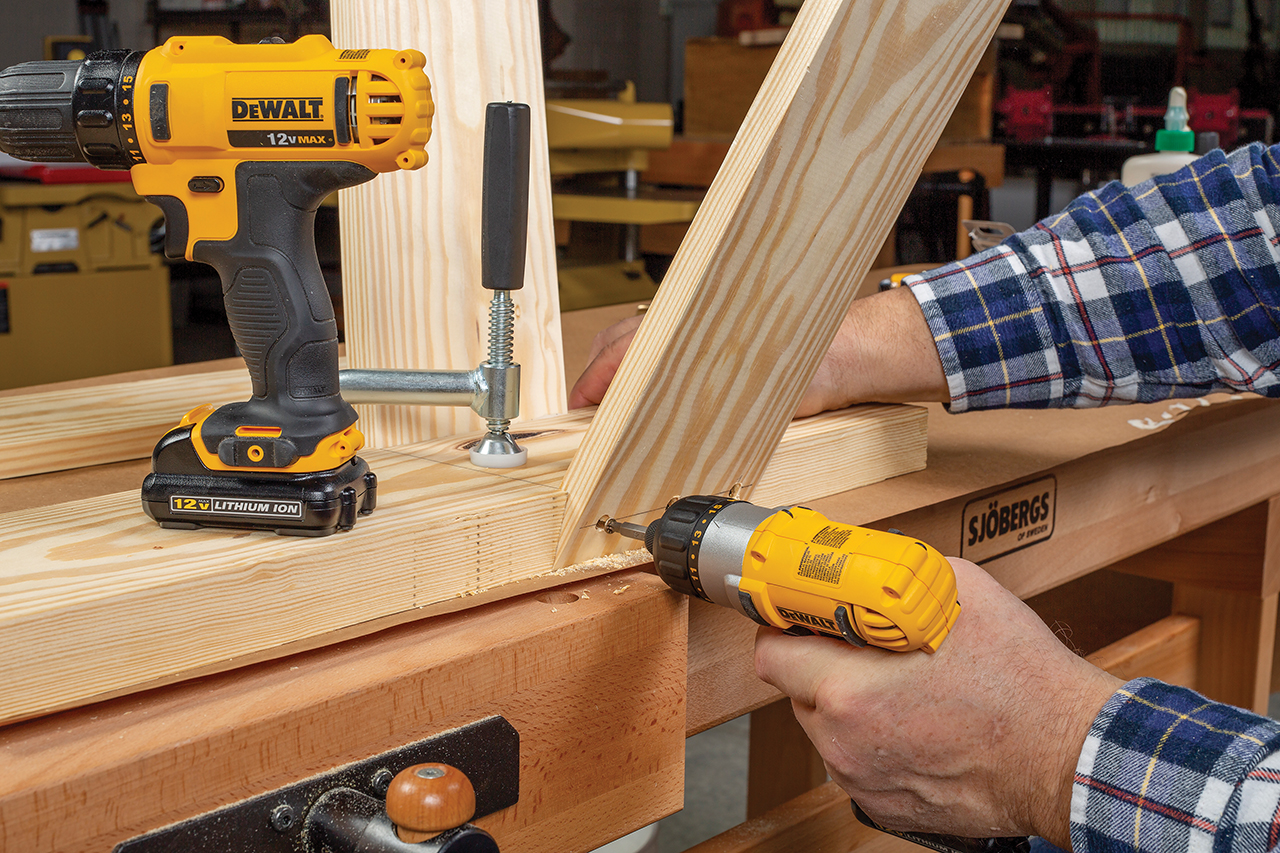 Glue and screw the legs in place with the horse upside-down and clamped to a flat surface. 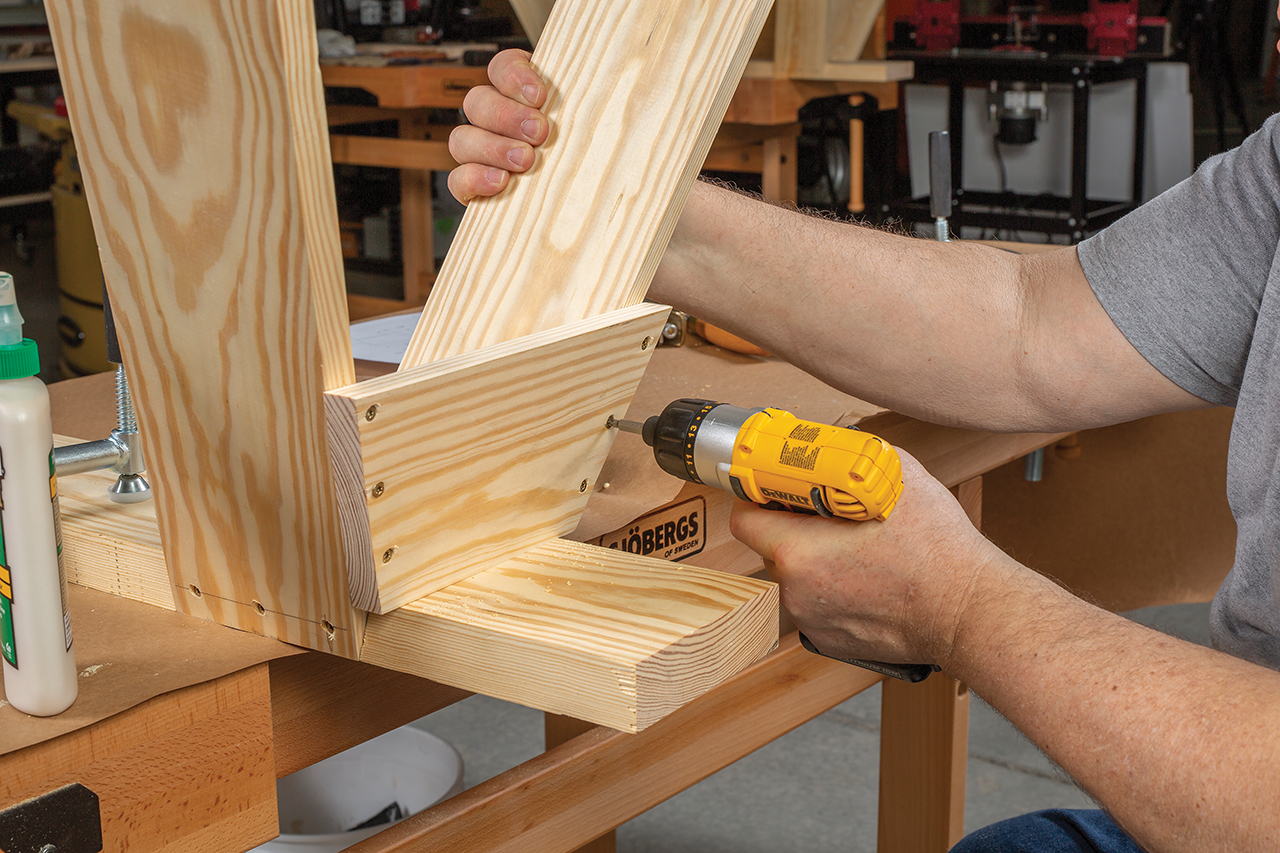 Bevel the edges of the brace stock to 15.92°, mark in place and cut slightly over-sized. 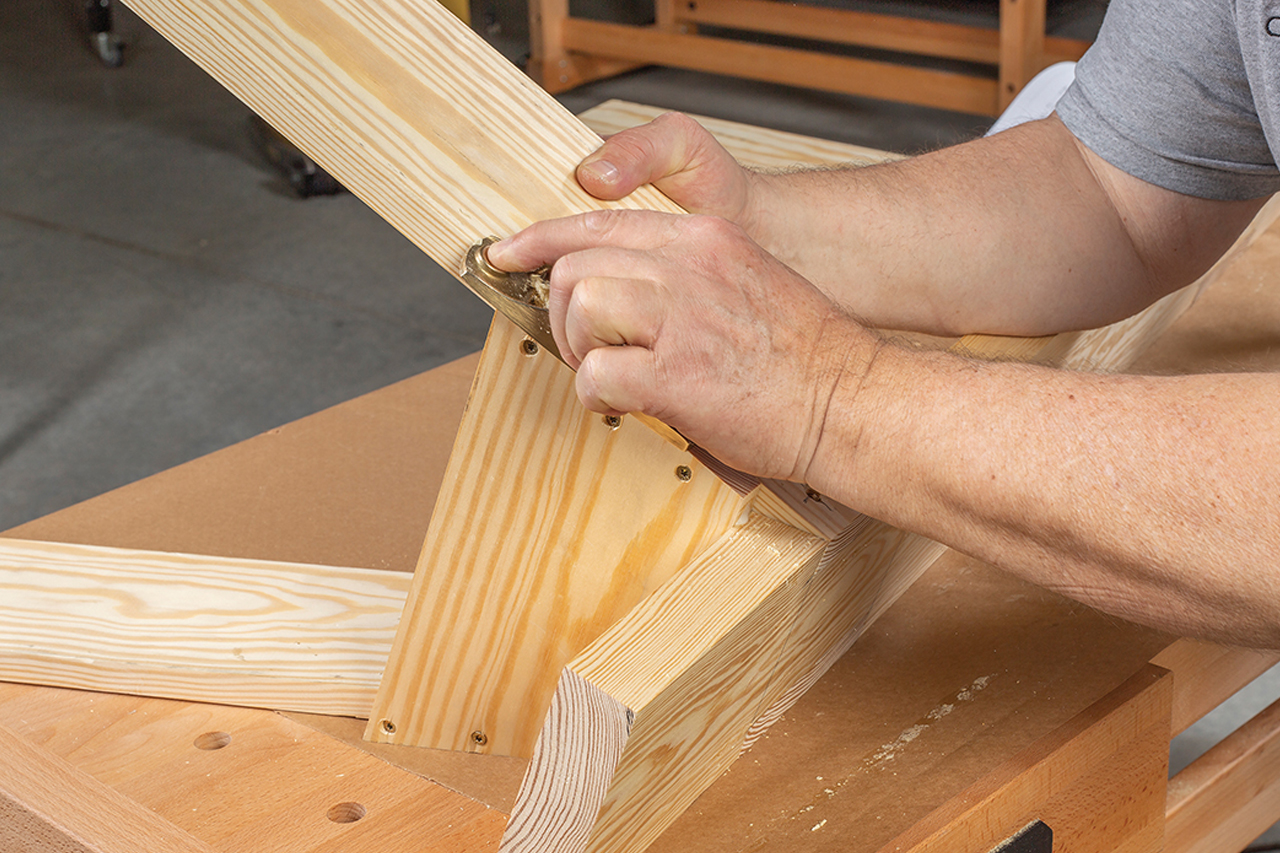 Use a block plane to trim the ends of the braces flush with the legs.

I test fit a leg into each mortise, shaving the edges of the legs with a block plane until I had a perfect fit.

I glued and screwed the legs into the mortises, confirming the leg ends were flush with the top of the saddle and the inside surface of the leg was firmly seated against the back of the mortise.

I set the table saw blade to a 15.92° bevel angle and beveled the edges of some of the left-over 1x6 stock to make the braces. I checked the splay of the legs with the Bevel Square at 20° to make sure the mortise angles came out right. One pair of legs was just a little too wide, so I put a bar clamp across the ends of the legs as I marked and installed the braces. I held a piece of the beveled edge brace stock across the legs on the outside and tight against the bottom of the saddle, then scribed the outside of the legs onto the brace stock. I cut the braces just a bit outside the lines, screwed the braces in place and used a block plane to trim the brace down flush with the leg.

Since I finished the horses a couple weeks ago, they’ve supported three product photo shoots and have been under several ongoing projects in the model shop. Guess this set has been adopted by Woodpeckers. If I want some for my home shop, it looks like I need some more lumber.

The Bevel Square, Angle Reference Plate and Joiner’s Marking Gauge I used in building the saw horses are part of Woodpeckers OneTIME Tool program. You’ll find complete details on the program on the back cover, but in short, OneTIME Tools are clever, well-made tools that solve a need for dedicated woodworkers, but probably couldn’t generate enough volume to be manufactured year-round. We have a talented team of product developers working on new designs all the time, and we occasionally bring the very best products back out for re-release. Look for the Bevel Square and Angle Reference Plate to come out of the vault sometime soon. 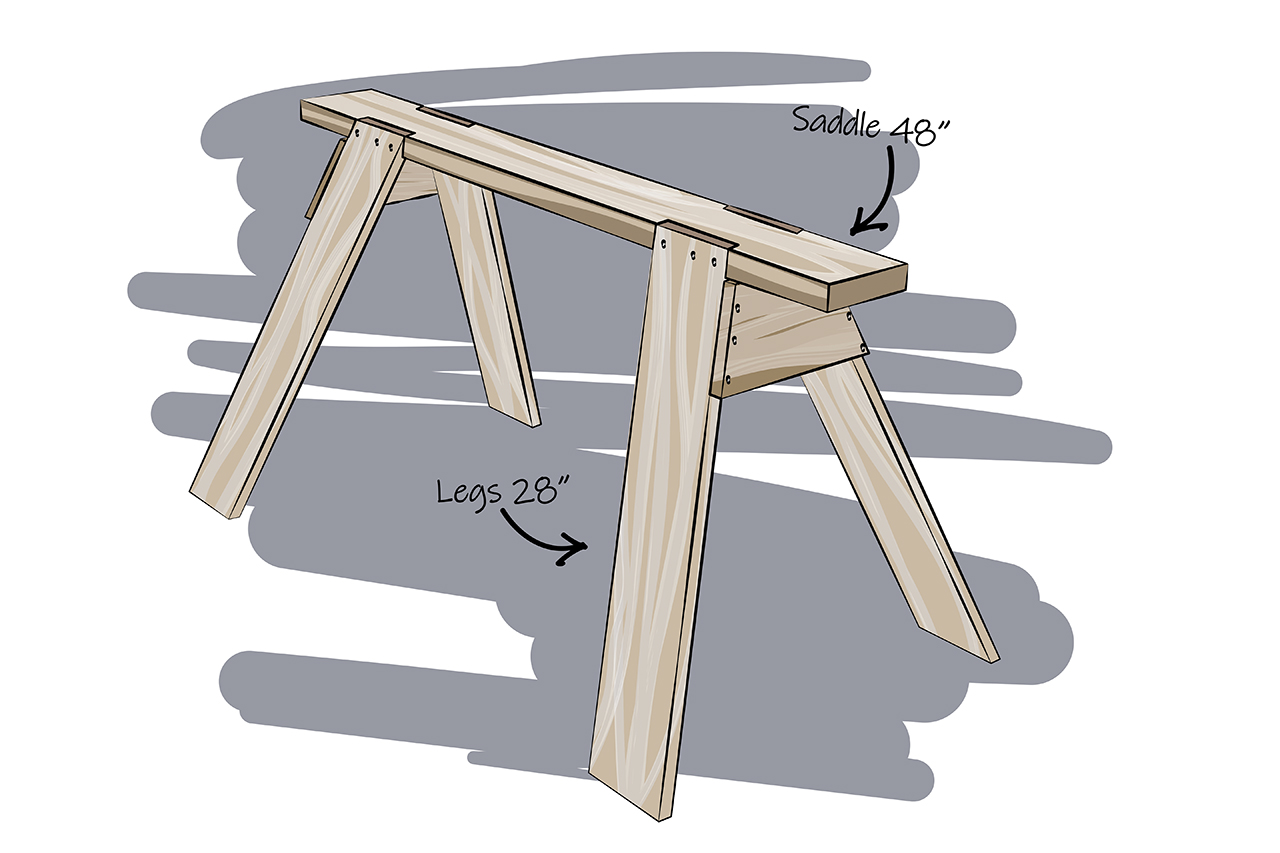