No need to spend a bunch of time milling stock to get the blanks you need for the next leg project.  Woodpeckers Woodshop has sourced the most popular species in just the right sizes.  Cherry, Walnut, Hickory, Soft Maple and Red Oak and now available in handy 2” x 2” blanks.

Due to international shipping restrictions, we can only ship this product in the United States.

Skip to the end of the images gallery 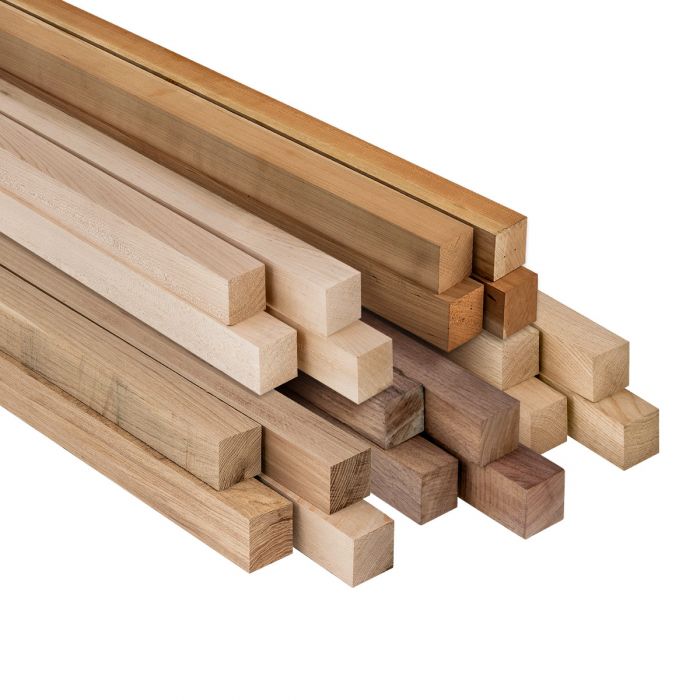 Skip to the beginning of the images gallery
Description

Black Walnut (Juglans nigra) is one of the most popular domestic woods. Heartwood can range from a lighter pale brown to a dark chocolate brown with darker brown streaks. Color can sometimes have a grey, purple, or reddish cast.  These hand-picked blanks make for exceptional turning stock or tapered leg stock.

Cherry (Prunus serotine) is one of the most popular domestic woods. It is prized for its straight grain, even texture, and natural luster.  These hand-picked blanks make for exceptional turning stock or tapered leg stock.

Hickory is an open grained hardwood that is often used for rustic applications.  We have found that it turns easily and can be used for small turning projects, tool handles and table legs. The grain can range from a blond or cream to a lively reddish brown with streaks of purple.  Hickory trees tend to have full crowns with many twigs, as a result Hickory lumber often has defects such as ingrown bark, tight knots and bird peck.  There are several types of Hickory such as Shagbark hickory and Pecan.  The true Pecan has a tighter grain and more vivid colors

Soft Maple is less dense than Hard Maple with a similar grain and figure. The sapwood in the soft maples is considerably wider than that in the hard maples and has a lighter heartwood color. Soft maple is used for furniture, kitchen cabinets, doors, musical instruments, turnings and millwork. It is lower-priced than Hard Maple and sometimes used as a substitute.

Red Oak (Quercus rubra) is a common species of wood universally used. The heartwood varies from pinkish to reddish brown. The appearance is similar to white oak, but due to smaller rays, its shape is less defined. Red oak is terrific for making furniture, leg stock and other turnings.

Wood is a natural product, and pieces may vary slightly.  Due to wood movement, shrinkage, and expansion, please measure each piece carefully.  Dimensioned within +/-1/8” of size listed.

WARNING: Wood Dust created by Drilling, sawing, sanding or machining wood products can expose you to wood dust, a substance known to the State of California to cause cancer. Avoid inhaling wood dust or use a dust mask or other safeguards for personal protection.