Custom Message
Includes 1 set FREE Caliper Arms
SKU
SSPRO-48-PM
$69.99
Woodpeckers Story Stick Pro is the new and improved version of Woodpeckers original Story Stick. Along with many new easy to use features, it's also now available in two lengths, 24” (600mm) and 48” (1200mm). The Story Stick Pro has both a standard and center scale on the top surface making it easier to read. It also now features clear double tabs. The double tabs extend out from both edges of the track thus creating a mirror image of your setup. Now you can set the Story Stick up once and use it from both edges of the board or both sides of a cabinet without having to reconfigure the tabs.
Add to Wish List
Skip to the end of the images gallery 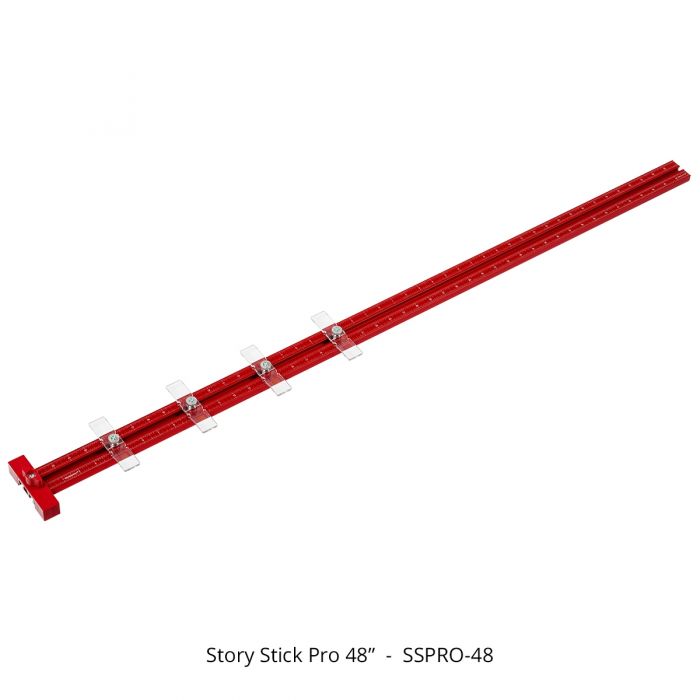 Skip to the beginning of the images gallery
Description

The Story Stick Pro supports a number of new accessories the first of which are caliper arms.

Say you want to put a perfectly fitting shelf between two cabinet sides. Simply adjust the arms out until they contact the sides, lock them in place and use that physical example to set your saw fence that distance from the blade.

The same approach can be used for cutting a lid to the exact size of a box.

It's not uncommon to use an existing part to cut more of the same size. That's exactly what the Story Stick Pro with Caliper Arms does for you only faster and more accurately.

The new Story Stick Pro is available in either imperial or metric version and includes (4) tabs and (1) stop. Caliper arms sold separately. Made in U.S.A.